Two stories on the Washington Post website, two prime examples of the “Virginia Way” in action. I’m not, of course, talking about the “Virginia Way” that meant Virginia was somehow above the petty (or more than petty) corruption we see in other states, countries, etc. Instead, I’m talking about the REAL “Virginia Way,” as explained here by DJ Rippert — “Endless recent scandals (Tobacco Indemnification Fund, Phil Hamilton, Star Scientific, etc, etc).” Below, you can see the two examples of how dirty money in politics has made a mockery of the “Virginia Way.” I mean, seriously, after all that’s happened — including Republicans having the chutzpah to attack Mark Warner over the sleazy Phil Puckett jobs-in-exchange-for-Puckett’s-resignation/control-of-the-State-Senate deal, the one that THEY came up with — Republicans are about to vote to approve a judgeship for Phil Puckett’s daughter? And these are the same people who the people of Virginia are trusting to enact ethics reform that’s worth anything? Amazing. 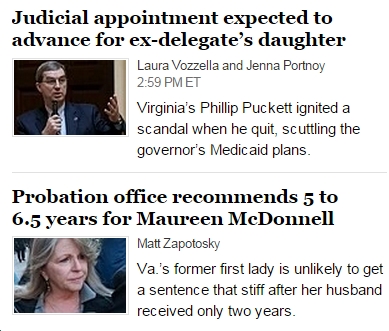