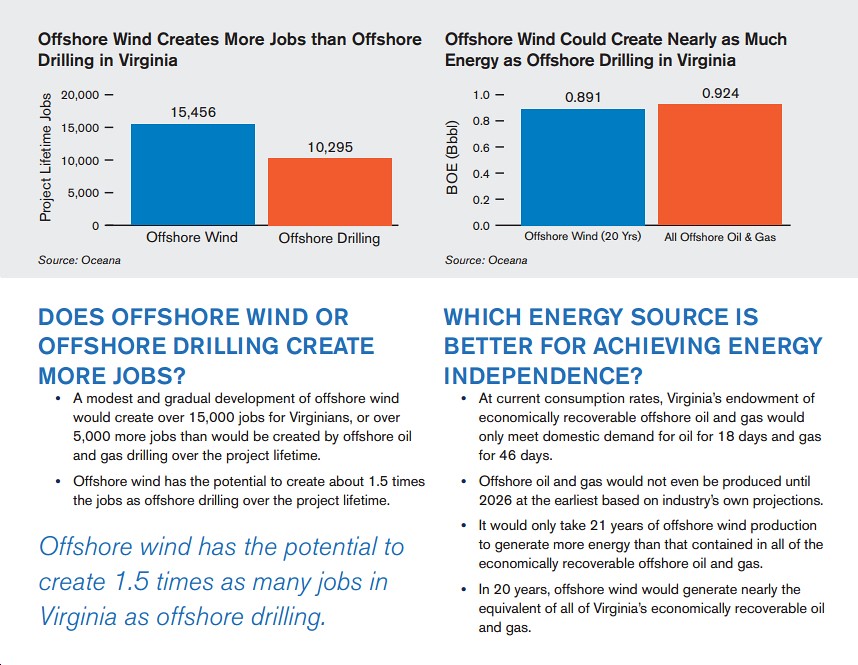 For anyone who thinks that dirty, dangerous, polluting offshore oil drilling is the answer to our energy and economic challenges, or just as wrongly that wind power is NOT the answer, check out this new report by Oceana and find out how misguided that belief is. A few key points from this report include:

*”The oil industry’s estimates are often based on unrealistic assumptions about the job growth potential of developing oil and gas.”

*”On the other hand, developing even a modest amount of available offshore wind resources would be a far better strategy to lead the U.S. toward energy independence, while generating hundreds of thousands of new jobs.”

*”The Atlantic has minimal fossil fuel resources compared to other regions used or being considered for domestic oil and gas production,” so little that “oil consumption could actually only be met for 132 days and gas consumption for only 283 days.” Pitiful.

*”A modest and gradual development of offshore wind on the East Coast could generate up to 143 gigawatts of power over the next 20 years, which is enough to power over 115 million households.”

*”In the next 20 years on the U.S. East Coast, offshore wind could create about 91,000 more jobs than offshore drilling, which is about double the job creation potential.”

*”In just 13 years of producing energy, offshore wind could generate more energy than could be provided by all of the economically recoverable offshore oil and gas resources.”

*”Along the Atlantic coast, nearly 1.4 million jobs and over $95 billion in Gross Domestic Product (GDP) rely on healthy ocean ecosystems, mainly through fishing, tourism and recreation (and those would be put at serious risk by offshore oil drilling).

*Offshore wind would create 15,456 jobs in Virginia, 1 1/2 times greater than the 10,295 jobs offshore oil drilling would create, but again without the risk of environmental damage.

*Also keep in mind that when the oil runs out, the jobs run out too. In stark contrast, wind power will never run out, which means that the jobs will also never run out. All “without the risk of a catastrophic oil spill.” Is this a no brainer or what?

One more point: offshore wind power is booming in many places around the world, just not here in the United States, thanks to our wildly biased, pro-fossil-fuel energy policies. For instance, in Europe, as of the end of 2013 there were “2,080 turbines…installed and grid connected, making a cumulative total of 6,562 MW, in 69 wind farms in eleven European countries.” During the first half of 2014, another 781 MW of offshore wind power came online in Europe, with 1,200 MW more awaiting grid connection. All told, in Europe, the “total capacity of all the wind farms under construction is over 4,900 MW when fully commissioned.”

The results of this offshore wind power boom in Europe? See U.K. And Germany Smash Wind Power Records for an idea: “wind generated enough electricity to power just over 25 percent of U.K. homes in 2014;” “Scotland hopes to generate the equivalent of 100 percent of its electricity from renewables by 2020.” Also see Denmark Sets World Record For Wind Power Production and Germany & Denmark Join Britain In Smashing Wind Energy Records and UK Offshore Wind Installations Forecast to Soar and…getting the picture? In short, Europe is putting the United States to shame when it comes to offshore wind power. Of course, it doesn’t have to be this way; the U.S. has enormous wind resources — as the Oceana report points out, “enough to power over 115 million households” — so this is mostly a political issue. Finally, note that offshore wind costs are plummeting, with Siemens recently projecting “a 40% drop in the price of offshore wind…within the next 10 years, or 30% at the least.” Again, what are we waiting for exactly? Paging Dominion Virginia Power! Paging Dominion Virginia Power! LOL