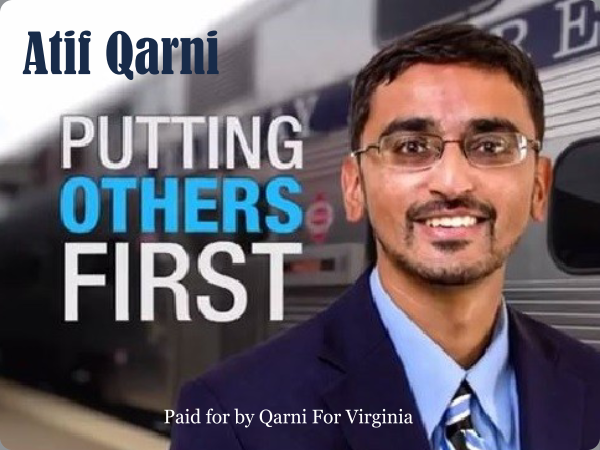 From the Atif Qarni for State Senate campaign; I couldn’t agree more that “Atif has the resume and the character to make Prince William County and Manassas proud in Richmond.” Go Atif!

Chopra Says “Atif Is, Without A Doubt, The Best Man To Fight For The Future Of Prince William County And For Virginia”

MANASSAS, VA -Aneesh Chopra has announced his support for Atif Qarni in the 29th Senate District Democratic primary.  Chopra is a former Lt. Governor candidate and was the first Chief Technology Office of the United States under President Barack Obama.

“Atif has proven himself to be one of the hardest working candidates I’ve ever met, and I have no doubt he’ll work even harder when he is in Richmond,” Chopra said.  “Atif is the only candidate in the field who is going to truly go fight for the reforms we need in our public schools so our kids can be competitive in an ever-changing economy. He is the only candidate who can take experience with both ends of Prince William County to Richmond, and he’s the only candidate who has the small business experience as a McAuliffe Administration appointee. He’s a teacher and he even served in the Marines for 8 years and saw combat in Iraq. Atif has the resume and the character to make Prince William County and Manassas proud in Richmond. Atif is the best choice in this primary, and to carry the torch of Senator Colgan in the general. I give him my full support, and I hope the voters of the 29th will too.”

Atif Qarni is running for the Senate of Virginia because he believes our district needs a strong voice to continue the legacy of Senator Colgan- one who will fight for important issues like improving our schools by reducing class sizes, bringing more jobs to Prince William County, and reducing the burden of traffic and congestion.

Qarni wants to continue his record of service to his country and his community that includes service in the armed forces as a Marine and as a public school teacher in Dale City.  He will be a strong voice for the values of the 29th District.