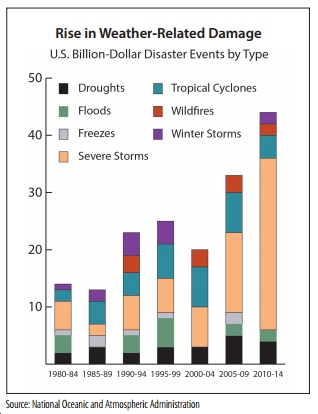 January 13, 2015 (Washington, D.C.) – U.S. Representative Don Beyer, Northern Virginia Democrat and member of the House Committees on Natural Resources and Science, Space, and Technology, released the following statement today in response to the American Academy of Actuaries' (AAA) report that cited the increasingly devastating effects of climate change in the United States due to hurricanes, floods, droughts and other weather-related events.

The AAA's “Essential Elements” report detailed the cost to human life and property from climate change. The report noted that storms and other weather events cost businesses and consumers dearly:  the world's five largest natural catastrophes of 2014, as ranked by insured losses, all occurred in the United States.

Beyer added, “Responsibly addressing global climate change is the challenge of our generation. We must do more to reverse it, including greater investments in clean energy."

The Academy cited 980 global natural loss events totaling over $110 billion in losses, including a series of severe storms over a five day period in May responsible for nearly $3 billion in damages. They have attributed over 7,000 fatalities to extreme weather last year.