Yesterday, The Bull Elephant reported that Virginia 10th CD Republicans had selected their new Chair (replacing John “Anti-Semitic ‘Joke’ Dude” Whitbeck, who is now RPV Chair believe it or not!), Jo Thoburn. I’d never heard of Thoburn previously, so I checked her Twitter feeds and fired up the ol’ search engines. Here’s a small sampling of “teh crazy” that I found. Note that “false flag” refers to Ron Paul’s insane accusations that the chemical weapons attack by the Syrian government that killed hundreds of civilians was a “false flag” (entering conspiracy theory cuckoo land here), while the “Endorsing Evil” tweet refers to Rand Paul endorsing Mitt Romney for president. Also note that Thoburn is from the Ron Paul wing of the Republican Party. Keep in mind that Ron Paul is a long-time conspiracy theorist, racist, anti-Semite, homophobe, etc., etc.

1. Thoburn says that “Jean Marie” (it’s actually spelled “Jeannemarie,” but as you’ll see, Thoburn’s command of the English language leaves much to be desired) as “slut.”

2. She repeats the bizarre, completely false charge that Planned Parenthood is somehow “racist” for the great work it does.

3. Here she seems to be agreeing that E.W. Jackson never would have been nominated for Lt. Governor if he weren’t African American.

4. Here she calls on Republicans to purge anyone she considers a “RINO” from the party, starting with then-Gov. McDonnell (who, based on many other tweets, she clearly despises, finds to be utterly corrupt, etc.).

5. Here Thoburn advocates that Christians not join the U.S. military.

(LOTS more crazy on the “flip”)

6. Here she argues that any Republican who voted for the 2013 transportation plan is “despicable.” That would include these folks and these folks – a LOT of Republicans, in other words, including House Speaker Bill Howell and Senate Majority Leader Tommy Norment, both of whom Thoburn considers “despicable”)!

7. Here she inquires whether one of the top Republican donors and powerful insiders in Virginia might be “just plain evil.”

8. Another Republican who’s “evil,” according to Thoburn, this time the 2012 Republican nominee for president.

9. I’m including this one for a couple reasons. First, for Thoburn’s hilarious misuse of “demigod” for “demagogue” presumably (I told you here command of English was shaky). Second, for her insane claim that China has “more economic freedom than we do.” Hey, so move there then and see how you like it! LOL

10. Thoburn’s anti-Israel views are a bit jarring, given the Republican Party’s fervent support for the Jewish State, but then again, they are very much in line with her hero Ron Paul’s isolationist worldview.

11. First off, let’s just stipulate that Dick Black is a raving lunatic. Specifically, in this case, Thoburn is praising Black’s bizarro letter praising the “extraordinary gallantry” of Bashar Assad’s Syrian Armed Forces (yep, the same ones who have killed, wounded, tortured, gassed, etc. hundreds of thousands of their fellow Syrians) as “spot on.”

12. This one’s more hilarious than anything else, as “cold fusion” has been completely debunked for years. Also, yet another grammatical mistake — should be “its” not “it’s.”

13. Yep, she actually believes the chemical weapons attack in Syria in August 2013 that killed more than 1,400 civilians was all made up for god-knows-what crazy conspiratorial reason…

14. This one kind of speaks for itself.

15. Her philosophy is, as far as I can tell, to dispense with large swaths of the government and the vast majority of taxes. Yet again, this is consistent with Ron Paul’s extremist views.

17. Finally, gotta love this letter comparing Prince William County Board Chair Corey Stewart to neo-Nazi David Duke. Note that the 10th CD covers a significant chunk of the PW County. I wonder what Corey Stewart thinks of this comparison. LOL I also wonder what many 10th CD Republicans think of Thoburn’s strongly PRO-“illegal immigrant” views. That should go over well with the anti-“illegal” bashers. 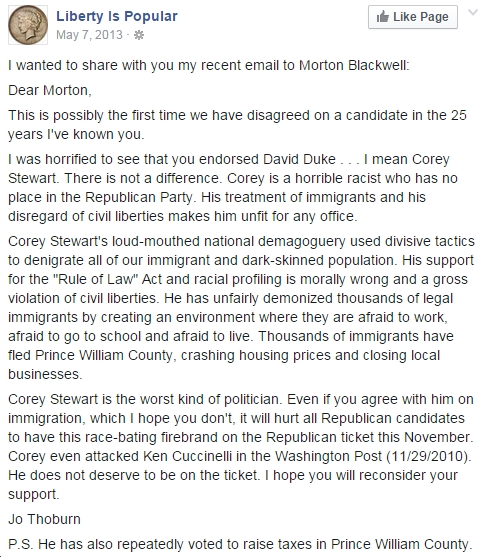 One last question: did people like Barbara Comstock push for and/or sign off on Thoburn as 10th CD GOP Chair? Now that these offensive, extreme, bizarro tweets are public, will they stand by her?