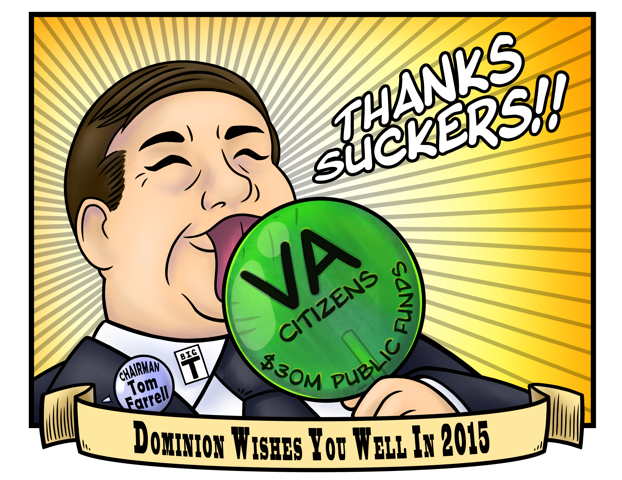 Recent Senate Bill SB 1349 (“Electric utility regulation; suspension of regulatory reviews of utility earnings”) needs your attention. The issue with this bill is neither Republican nor Democratic, but rather a consumer issue. As rate-payers, as voters and even as legislators we are being told by a monopoly corporation that we have no control over the most fundamental operating assumption as energy consumers, namely what direction the price curve should point for electrical service in the Commonwealth of Virginia.

Dominion has called for rates to be fixed for five years at a high price, just after a rate increase last year. When pushed, Dominion offered up 500 megawatts of new Virginia solar power, as well as nominal energy efficiency efforts. That these things were offered up effortlessly, at the last minute, suggests that they were part of the mix Dominion intended all along.

I have read the Dominion Integrated Resource Plan for 2014 and was impressed with the modeling the company does to run a multi-state energy corporation. Dominion is entrusted with the control of two nuclear reactors and to make decisions costing hundreds of millions of ratepayer dollars. Yet, per Senate Bill SB 1349, Dominion gets no oversight of their profits, because it supposedly does not know what its profit perspective over five years will be, after adding 500 megawatts of solar and energy efficiency to their bottom line. This strains credibility.

Note that Dominion has a 200-day moving average on the NYSE that is solidly and very consistently upward. It takes thousands of well-qualified folks to bring us power year in and year out. Dominion has already made solid low-carbon investments in selling off coal plants, runs two zero-carbon nuclear plants at Santa Ana, and runs the world’s largest (3 gigawatts) pumped water storage battery in Bath County. These are all positive steps toward some of the cleanest power in the country.

Dominion’s investments in new Virginia solar power will reduce the number of peak summer hours the company needs to seek outside the Virginia, or to spin up expensive natural gas peaker plants. But the real benefit of renewable energy to stabilize rate increases is the merit order effect (MOE). Power companies stack power in terms of the cheapest fuel cost in order to reduce their end costs to consumers. Renewables (and energy efficiency) are stacked in first, as once a solar farm or wind farm is online, the fuel cost is essentially zero.

This week, the TVA is soliciting solar installations at $61 per megawatt hour, with natural gas coming in at $59 per megawatt hour. Almost identical. In addition, solar power works out nicely as a resource that peaks in the summer when everyone is running their air conditioner. As such, solar power helps offset the expensive natural gas peaker plants that run at $180 per megawatt hour (three times solar’s $61) during high demand summer hours. Cleaner and cheaper power should be something to celebrate, and it would be if not for Dominion’s games.

All of which brings us back to the reason why Dominion doesn’t want Virginia looking at its profits. Simple: because solar power and energy efficiency will make Dominion more profitable. In short, Dominion wants us out of their books so it can make money by reducing the hours that peaking facilities need to run, and also to ensure that Virginia energy consumers have no voice in what the price curve of power should be for electricity in the Commonwealth.

For those reasons, Senate Bill SB 1349 has richly earned your veto.

Oh, and Appalachian Power should rebate the nearly $50 million its CEO admitted would be rebated without SB 1349. In addition, Dominion should rebate any funds due to last year’s previous rate hikes.

This issue deserves a special session to determine the characteristics of Commonwealth energy delivery and what the price curve should look like for ratepayers.

Per Dominion energy modeling, cleaner and cheaper is feasible. No wonder why the company made such efforts to send the Virginia legislature through contortions to avoid our ability to look into the company’s balance sheet. Instead, we need a more robust debate about about Virginia’s energy future. Such a debate might include, for instance, discussion of more consumer and community-owned facilities via a ‘green share’ crowdsource financing mechanism to build a more distributed and diverse power system throughout Virginia.