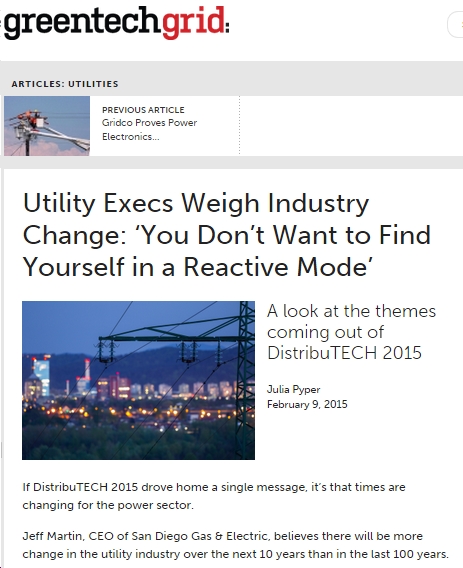 I’ve written about this previously, including back in January:

On the upside, policy is something we can change, at least in theory. Of course, the “powers that be” could decide not to change policy, but that won’t help their pals at Dominion Power in the long run. For more on that, see David Roberts’ superb article, Rooftop solar is just the beginning; utilities must innovate or go extinct. So, Dominion (and Virginia more broadly) has a stark choice: 1) continue to fight inevitable change, saddle Virginians with dirty energy for years to come, yet eventually see the entire business model collapse anyway (what Roberts calls the “death spiral”); or 2) adapt to a changing world, one in which even oil-rich Middle Eastern countries are moving heavily into solar power for purely economic reasons — because its price is low and heading lower. It seems like an easy call to make, but as we saw just this morning, with the defeat of a Virginia renewable energy tax credit bill (by Del. Rip Sullivan) in a House of Delegates committee, there are a lot of politicians who still don’t “get it.”

Yesterday, Greentech Media (a must-read publication if you want to understand the world of energy) reported (from the DistribuTECH Power Transmission Conference in San Diego) that utility executives are increasingly realizing they need to adapt to the lightning-fast change occurring in their industry…or deny and resist it (and probably commit suicide by doing so). The former course of action is obviously the correct one, from the utilities’ own long-term self-interest perspective, but that doesn’t mean that all of them will “get it.”

As Greentech Media points out: “The threat is real. According to new research from Accenture, utilities face $48 billion in revenue losses by 2025 due to customer-sited distributed energy technologies.”  Also note: “Michio Kaku, a renowned theoretical physicist, author and futurist, implored the audience to embrace technological innovation, or else get left behind.”

In the case of Dominion Virginia Power, it appears that they are hell-bent on using their political clout (e.g., their bought-and-paid for state legislature and State Corporation Commission) to dig in their heels, resist change, and…eventually get run over by it. I’d almost say “good luck with THAT strategy,” except in the meantime, they’re hurting 8 million Virginians, the economy, the environment, you name it. So, instead, I’m hoping that Dominion’s bought-and-paid for “allies” wake up and take a message of “tough love” to this arrogant (they seriously appear to think they’re geniuses, but in fact they’re close to the polar opposite), head-in-the-sand reactionary monopoly.