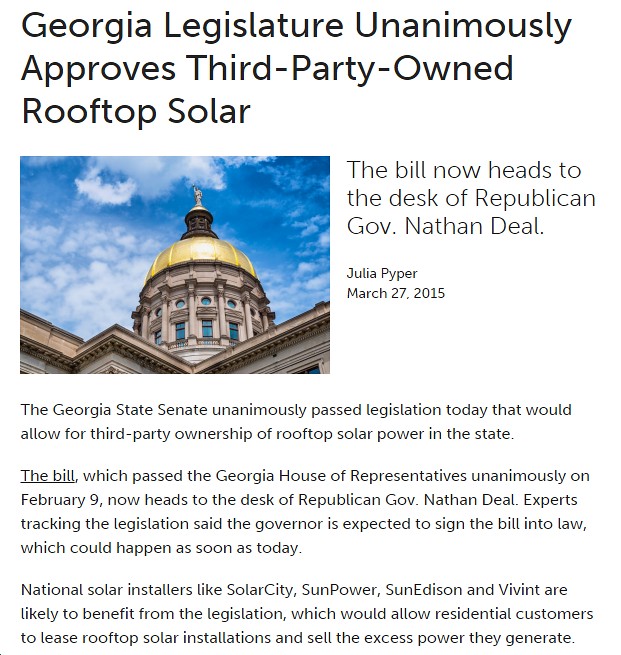 Yes, believe it or not, Virginia – which we’ve heard politicians claims SHOULD be the “energy capital of the east coast” – is not only failing miserably in that goal, it’s even falling behind politically “redder” states like North Carolina and Georgia.  Read it and weep (or better yet, get vocal!)

National solar installers like SolarCity, SunPower, SunEdison and Vivint are likely to benefit from the legislation, which would allow residential customers to lease rooftop solar installations and sell the excess power they generate.

…The “Solar Power Free-Market Financing Act of 2015,” spearheaded by Rep. Mike Dudgeon (R), was a year and a half in the making, with a strong push from the conservative grassroots group Georgians for Solar Freedom.

Meanwhile, here in Virginia, it’s very VERY difficult for rooftop solar power leasing companies like SolarCity, SunPower, SunEdison and Vivint to operate, as Dominion Power and its bought-and-paid-for political puppets throw obstacles in their path, while keeping the playing field heavily tilted in the direction of dirty energy  (through taxpayer-funded corporate welfare of various types, failure to make the “polluter pay,” refusal to adopt a serious Renewable Portfolio Standard for Virginia, etc.).

As a result, Virginia has fallen wayyyy behind many other states when it comes to distributed (or even utility-scale) solar power (see 2014 Top 10 Solar States and note that you won’t find Virginia anywhere on there — #FAIL). So when is this pathetic situation going to change?  Simple: when we forbid state-regulated monopoly Dominion Power from buying our political system, and when we elect more pro-clean-energy legislators to our state legislature.

On that latter point, note that some of the strongest supporters of solar power are conservatives and even Tea Partiers. For instance, see Thanks To Conservatives, Florida Is Now One Step Closer To Making Solar Energy More Accessible, which explains how a “pro-solar conservative group in Florida cleared a major hurdle this week in its journey to make solar more accessible in the state.” Also see ‘Green Tea Coalition’: Strange bedfellows fight for solar power in Sunshine State. So where’s the Virginia version of the “Green Tea Coalition?”