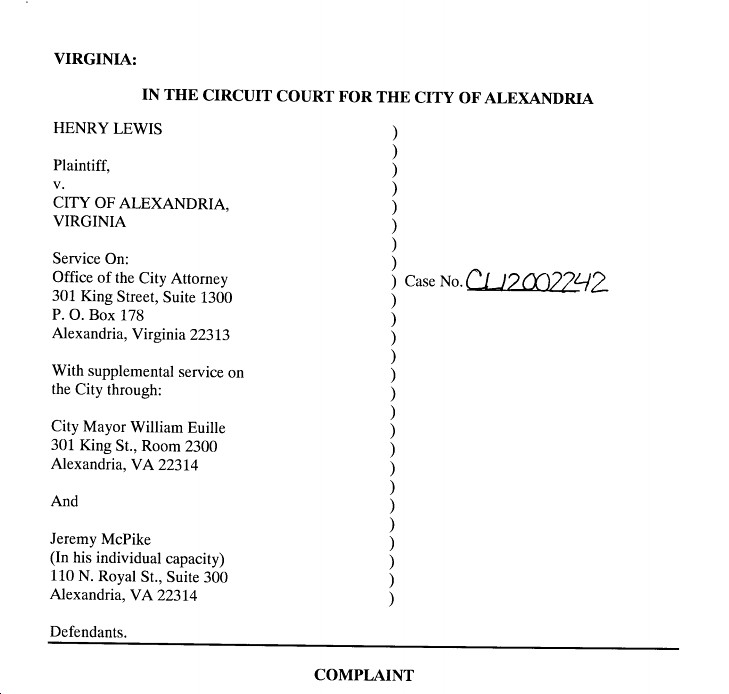 The race for the Democratic nomination in the 29th State Senate district to succeed long-time Sen. Chuck Colgan (D) is underway, with three Democrats – Atif Qarni, Michael Futrell and Jeremy McPike – in the running. As I’ve stated on numerous occasions, I am supporting Atif Qarni for a bunch of reasons, including that I think he’d be the strongest candidate in what’s likely to be a tough general election campaign against Republican nominee and Manassas City Mayor Hal Parrish. Note that Sen. Colgan won reelection in 2011 with just 55% of the vote, against a candidate who is far less known than Parrish.

The point is that, although the 29th is certainly a winnable district for Democrats (Mark Herring got 59% in the 29th against Mark Obenshain in 2013), it’s most definitely not going to be easy. Which is why we need a candidate who doesn’t offer Republicans easy, potentially potent, attack angles. For instance, two minutes of using Google for “Jeremy McPike” will find you the following stories:

*The Corruption Scandal You Haven’t Read About (Bacon’s Rebellion, 8/18/13)

On and on it goes. Note that the point of posting these links isn’t because I like linking to right-wingnut sites, like PJ Media, but simply to make it clear that Republicans were well aware of this information in 2013, used it in 2013, and would with 100% certainty pound McPike on it again in 2015 – this time with a lot more money put behind the attacks. In short, 29th State Senate District Democratic “buyer beware”: if you vote for Jeremy McPike, you’re voting for the almost certain loss of this seat in November. You’re also voting, almost certainly, for Democrats NOT to have any chance of taking back the State Senate in November, as holding Chuck Colgan’s seat is crucial to Democrats’ chances of doing that.

Just to review, the main charges Republicans would certainly use against McPike if he’s the Democratic nominee include:

*McPike claims on his website that one of his key goals in Richmond would be to “promote government accountability and transparency,” yet the legal case against him (which he lost, per a jury of his peers) has a variety of charges against McPike regarding problematic ethics. For instance, the claimint, Henry Lewis, says he told McPike: “Because you are my supervisor does not give you the right to demand that I sign what I believe to be an illegal document..If I sign a document that I believe not to be in accordance with the contract and payment is made on that document – I have committed fraud. I will not sign an illegal document at your direction.” This, according to the court documents, let to “Lewis [being] threatened and harassed as a result of his refusal to go along with McPike and. McPike’s willingness to submit to Whiting-Turner’s false claims as alleged herein.” All of this because former Alexandria city architect Henry Lewis brought to McPike’s attention his concerns regarding the legality of actions taken by the construction firm (Whiting-Turner ) contracted by the City of Alexandria to build an $81 million police station. In response, McPike tried to circumvent Lewis, while stepping outside his authority to insist that invoices be paid, even though the invoices were improper.

*McPike then threatened Lewis with disciplinary action if he didn’t stop his “insubordination” and sign the illegimate invoices. McPike also said Lewis was being “too tough” on Whiting-Turner and said he should “give them a break because I worked with them on the Potomac Yards Fire Station.” After Lewis continued to stand his ground, he was terminated on August 3, 2011.

*All of this cost the taxpayers of Alexandria: “All totaled, Whiting-Turner submitted, and McPike authorized payment of more than $2,102,580 in invoices for the purchase of materials that were not verified to exist as per the contract between the City and Whiting-Turner.” In addition, as the Patch reported, the jury awarded Lewis “$104,050 in back pay.” In addition, according to Virginia Supreme Court documents, “the jury’s award of $104,096 in back pay and the circuit court’s doubling of that award as liquidated damages, for a total award of $208,192; (ii) the circuit court’s award of $8,181 for lost vacation pay; and (iii) the circuit court’s award of $243,684.12 in attorneys’ fees.” That’s $563,000 total, thanks to this mess.

The bottom line here? All of this is factual information, on the public record, some of it already used in 2013 against Jeremy McPike by the Republicans. I talked to McPike in 2013 about this, and at the time he said it was overblown, no “there there,” etc., but without any real evidence as to why exactly a jury had found otherwise. Regardless, this time around, there’s little question that Hal Parrish et al. are salivating over the chance to use this material yet again, this time in the 2015 general election against Jeremy McPike. That is, IF McPike is selected as the Democratic nomninee in the 29th State Senate district on June 9. Let’s hope Democrats in that district make a much wiser choice…