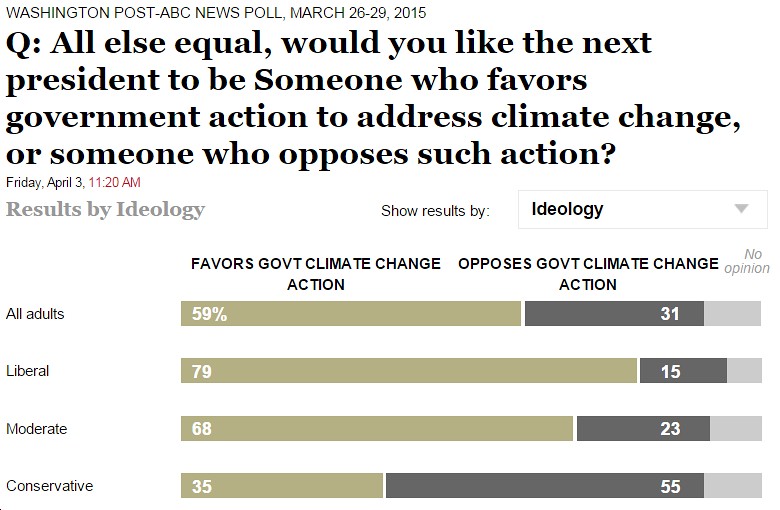 I’ve written about this many times before, and will continue to do so as long as I see the media drawing an absurd, demonstrably false “equivalence” between Republicans and/or the Tea Party on the one hand, and Democrats and/or Progressives on the other hand. In fact, polling shows overwhelming that On Issue After Issue, Americans Support the Democratic/Progressive Position. Just name the topic, from guns to global warming, from the minimum wage to immigration policy, from LGBT equality to a woman’s right choose, and you’ll find the same result: Democrats and mainstream progressives are  in the majority, often the overwhelming majority, while Republicans and right wingers of all stripes are in the minority, often the small minority.

Today, we have yet another major poll, this time by the Washington Post and ABC News, demonstrating the same result.

This is an incomplete list, but Hillary Clinton will support international engagement and government action to combat climate change; an immigration reform compromise that exchanges more border security for some kind of path to legalization for the 11 million; a deal with Iran curbing its nuclear program (if one is reached); and a continuation of the movement towards universal health care set in motion by the Affordable Care Act (whatever its fate at the Supreme Court).

By contrast, by the time the eventual GOP nominee is chosen, he will probably have come out against any global climate treaty and at best hedged on domestic climate action; he will have cast serious doubt on whether he can support a real plan for legalization; he will have promised to undo any Iran nuke deal; and he will have vowed to continue the crusade for Obamacare repeal until he draws his very last breath.

The poll finds that on all of those issues, Republican and conservative voters are on one side, while majorities or pluralities of Americans – including independents and moderates – are on the other…

*By an 88%-7% margin, conservative Republicans want to ditch “Obamacare.” Everyone else? Among all adults, 45% want to repeal it, while 49% want to keep it. Not a huge margin, but it’s dragged down by almost monolithic hatred among far right wingers of the law named after President Obama (even as that law benefits them in many ways).

*Finally, on immigration reform, a majority of Americans (51%-45%) support a path to citizenship for undocumented immigratns. And I know this will come as a shock, but the right wingnuts are far out of the mainstream yet again, with conservative Rpeublicans OPPOSING a path to citizenship by a huge 78%-18% margin. Everyone else supports a path to citizenship: independents by 8 points, moderates by 11 points, Democrats by 40 points, liberals by 52 points.

Bottom line: next time you hear someone saying stuff like “there’s no difference between Democrats and Republicans,” or “both sides’ partisans are out of the mainstream,” or whatever, just point them in the direction of Google, where they will quickly find thousands of polls, including this latest one by the Washington Post/ABC News, proving them dead wrong.