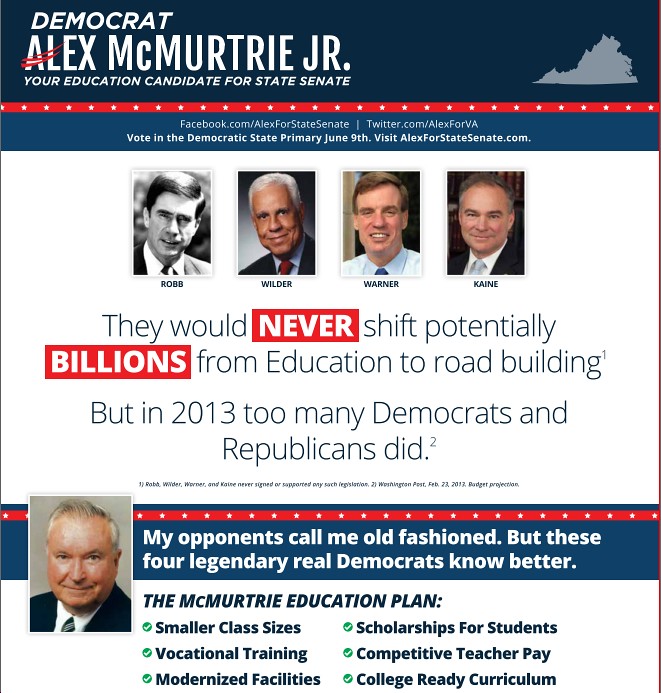 Yesterday, I received a mass email from Paul Goldman, a formerly frequent contributor to this blog who is now working for the Alex McMurtrie for State Senate campaign (note: click here for the candidates in this race to succeed Sen. John Watkins in the 10th State Senate district – Chesterfield County, Richmond City, Powhatan County), entitled “McMurtrie campaign stands-by latest mailer despite protests from opponents.” I was heading off yesterday morning to my nephew’s graduation at Shenandoah University, so I didn’t have much time to look at the mailer, but today I’ve had a chance to ponder a bit, also ask around for the opinions of people I respect.

My conclusion is that the McMurtrie mailer in question (see at the right) does raise interesting, “meaty” questions regarding how Virginia’s budgetary “sausage” is made. For instance, should “general fund” revenues be diverted towards transportation and away from education, health care, etc? Did the 2013 transportation bill fund transportation at the expense of education? You’d think there would be a clearcut answer to all this, and perhaps there is, but I must say I don’t find it easy to wrap my brain around this complex, smoke-and-mirrors budgetary stuff.  With that said, here are a few points which I think are relevant to this discussion.

The bottom line is that this mailer does raise interesting issues, but I’m not sure the specifics regarding the 2013 transportation bill make the best case. However, I DO believe that for Democrats, education should be a core value (along with things like health care, public safety, environmental protection, etc.), while transportation money should: a) focus on transit-oriented, smart-growth development pattersn; b) be funded by revenues that relate directly to transportation, such as raising the gasoline tax, etc.; and c) never cut into education funding, or even reduce the rate of INCREASE in education funding, to pay for it. Arguably, what the 2013 transportation bill did was not nearly enough of “a” or “b,” and too much potentially of the “reduce the rate of INCREASE in education funding” part of “c.”