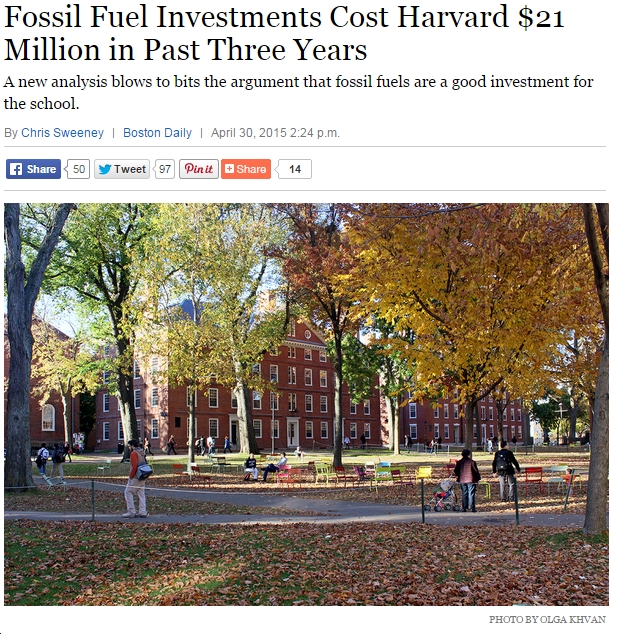 Let’s assume that, for some crazy reason, you don’t give a crap about maintaining a habitable planet for yourself, kids, grandkids, etc. Let’s just say that ALL you care about his the almighty dollar (in other words, you’re an Ayn Rand-style sociopath). In that case, should you support college/university endowments, retirement funds (e.g., the Virginia Retirement System), etc. divesting from fossil fuels? Well, here’s some evidence that might not be such a bad idea!

In a review of publicly disclosed material, we have found Harvard Management Company has lost an estimated $21 million…over the past three years by ignoring calls to divest and continuing to hold the world’s largest owners of coal, oil and gas reserves. The losses have accelerated recently with an estimated $14 million drop in just the past six months ending March 31st.

You also might be interested in reading Bank of England warns of huge financial risk from fossil fuel investments and Oil Investors May Be Running Off a Cliff They Can’t See and Life after divestment: how to spend the money saved from fossil fuel investments. Also, note to Gov. McAuliffe: yes, our state DOES need leadership on this subject, and yes it IS your job as governor to provide said leadership. Just sayin’. 🙂