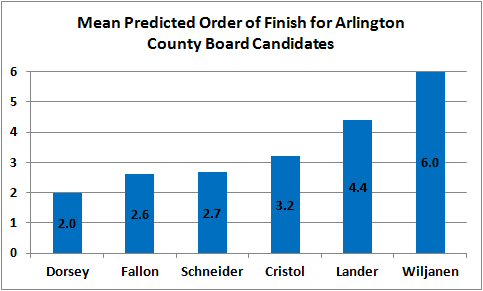 The other day, I emailed a couple dozen Arlington County elected officials and top politicos for their thoughts on who will win next Tuesday in the County Board Democratic and 45th House of Delegates Democratic primaries.  Here are the mean predictions, with a few interesting comments by the politicos. I promised everyone that I would not reveal their identities, to encourage them to respond honestly, so don’t even bother asking me. 🙂

With that, first here are the predictions for Arlington County Board. As you can see, Christian Dorsey is the consensus favorite for the top slot, with Peter Fallon and Andrew Schneider battling out for second place, and Katie Cristol barely off the pace in fourth place. The consensus is that James Lander will finish fifth, and all respondents picked Bruce Wiljanen sixth.

Here are a few interesting comments jumped out at me.

*”2-4 could be very close in the Arlington County Board race (within 5 points).”

*”The CB primary is a total crapshoot. The only thing I’m pretty confident of is Wiljanen finishing last. After that, all of these candidates could finish in any order and I wouldn’t be surprised. Having said that, this is going to be a super low turnout election which probably favors candidates with support in north Arlington a little bit.”

*”Could be wishful thinking on my part that Libby’s candidate doesn’t win. (Dorsey may be a great guy but jumping in to the Libby camp with both feet cuts both ways. I know a LOT of people that aren’t going to vote for him based on that alone.)”

*”Fallon seems to have everyone supporting him with many believing he’s earned it…so its hard to not see him being the top vote getter..I struggled to pick between Cristol and Schneider for second vote getter – I think both are running good campaigns (though I’ve only received mail from one of them.) However, because Lander is the only elected, he should have good name ID and could surprise people by sneaking into the second spot in a low turnout election.”

*”Unfortunately for him, I think Andrew squandered away some of his money by having two mail pieces hit before the school board caucus, which many voters probably lost in the mix. His mail has also been fairly plain and unimpressive. However, I think he still probably will have enough support through his personal networks to carry him to the finish line.”

*”A couple weeks ago I would have put Peter in a close third. However, he too has squandered an opportunity in the mail. Peter has run twice before, and voters clearly didn’t like him. Granted this is a primary, but the way Peter wins is by getting people to give him their second vote because voters trust either Patrick Hope, Barbara Favola, or Rip Sullivan. However, foolishly Peter’s first two pieces didn’t have anything about this endorsements on them…he should be reinforcing that support on every piece.”

*”Katie Crisol benefits from being the only woman on the ballot, and with Mary Hynes leaving the board, many voters will want to replace a woman on the board, and Katie is their only option. Katie has also proven to be a serious candidate, and the Washington Post endorsement was a huge validation. The question is whether she is able to get a piece in the mail about it before the election.”

*”More than any other election in recent memory, it’s vital that candidates staff the polls. Many people will be persuadable on their second choice, and a well-organized team could help put a candidate over the top.”

*”I think Schneider is enough people’s second vote (and a lot of people’s first vote) that he ends up in the pole position. However, I think it is an unsettled field – and I could see any number of permutations emerging.”

*”I think Dorsey is (and will continue to be) hurt by the Garvey connection. And I think Cristol will fall away as more people take a closer look at her experience (lack of). Fallon has gotten good endorsements (including your own) but I’m not sure how that will translate (he could end up doing well and I would not be surprised) and whether he can move beyond some of the housing/social programs support in the Hope/Favola camp. Lander may benefit from name recognition and from second place votes – and a sense among Democrats that for his shortcomings he has done pretty well as chairman and has taken the Board in a different direction that Abby.”

*”I don’t think that is automatic to November once the two nominees are selected. I would not discount the potential for [Republican] Mike McMenamin to be a serious challenger for a seat. ”

*”I think the difference between Schneider, Lander, and Cristol will be less than 100 votes. My ‘darkhorse’ favorite for a second seat is Cristol because she seems to be a lot of folks’ second choice and perhaps is least associated with any particular “camp” in Arlington politics. If enough folks find her refreshing she’ll claim the number two spot.”

*Dorsey – “despite his association with Peter Rousselot and Libby Garvey, he’s got a lot going for him and he is so eager.”

*Fallon – Will finish third because “old fogies vote but probably not in large enough numbers.”

*Schneider – Will finish second “because he’s got deep roots in Arlington and these people will vote.”

*Cristol – Will finish fifth; “leaving the forum tonight, heard a couple wondering where she works – dazzling performance but we still don’t know enough about her.”

Now for the 45th House of Delegates Democratic primary. 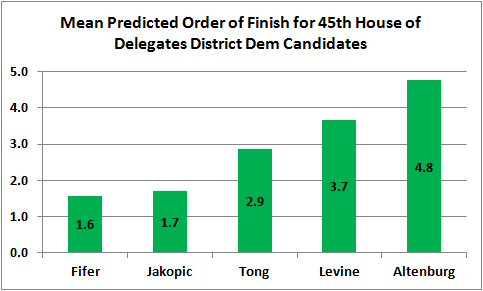 A few comments that jumped out at me were:

*”I think Fifer has run the best campaign – solid fundraising, good endorsements, good team behind him – he should win. However, if EMILY’s List really engages for Julie, they could make the difference for her lackluster campaign. It’s possible that Clarence with all of his money could make an impact, but he just seems to not be connecting with people.”

*”Julie got off to a slow start, but I hear she’s picked up the fundraising and really kicked into gear. Also, in a non-IRV, 5-way primary, the winning number could be as low as 35%. Between her deep ties to the district and Rob Krupicka’s endorsement, it’s hard to imagine her not being able to hit that.”

*”Craig Fifer has also done well in the fundraising department and should be able to communicate with voters. His job with the City of Alexandria and endorsement from Adam Ebbin helps, but he doesn’t have the roots Julie has and, as the 8th CD primary showed us, Adam Ebbin isn’t terribly popular– even in his own district! He won less than 1,500 votes in the 14 Alexandria precincts in the 45th, and the Congressional primary turnout was definitely higher than it will be on June 9th.”

*”Just like the Congressional race, Mark Levine will once again demonstrate that voters are too smart to allow someone to buy their way into elected office. Maybe if Mark had spent more time working to help other Democrats and build the party before dropping $70k into his own Delegate race he would have some institutional support.”