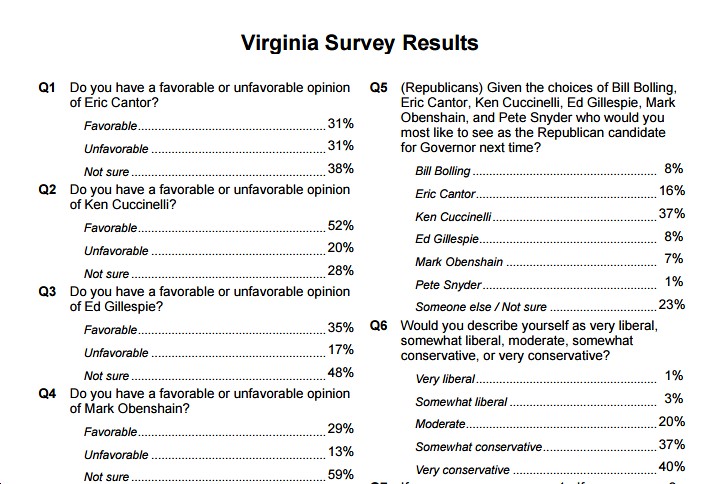 Ken Cuccinelli’s campaign for Governor of Virginia in 2013 was largely seen as a disaster…but Republican primary voters in the state want him to be their candidate again anyway. 37% say Cuccinelli would be their preferred nominee in 2017 to 16% who pick Eric Cantor, 8% each for Bill Bolling and Ed Gillespie, 7% for Mark Obenshain, and 1% for Pete Snyder.

Also interesting: Democrats are not at all tuned in to the 2017 governor’s race, but to the extent they are, Mark Herring leads Ralph Northam 33%-9% for the Democratic nomination. As for the general election, it’s basically neck-and-neck at this point, although Mark Herring does slightly better than Ralph Northam. Again, though, it’s very early.

On the Democratic side both of the most likely contenders for 2017 are relatively unknown. Attorney General Mark Herring has 46% name recognition with Democratic primary voters and for Lieutenant Governor Ralph Northam it’s 37%. Those numbers are a good reality check on how much attention voters pay to down ballot offices. Herring starts out with a substantial lead over Northam for the nomination, 33% to 9%. But at 58%, a strong majority of voters are undecided.

The hypothetical general election match ups we tested for 2017 all start out close. The match up between the preferred nominee on each side, Cuccinelli and Herring, starts out as an exact tie at 38% each. Herring also ties Obenshain at 34, leads Cantor 36/33, and trails Gillespie 38/34. Northam trails all the Republicans but by generally tight margins– 2 points to Cantor and Cuccinelli at 35/33 and 37/35 respectively, 4 to Obenshain at 36/32, and 7 to Gillespie at 37/30.