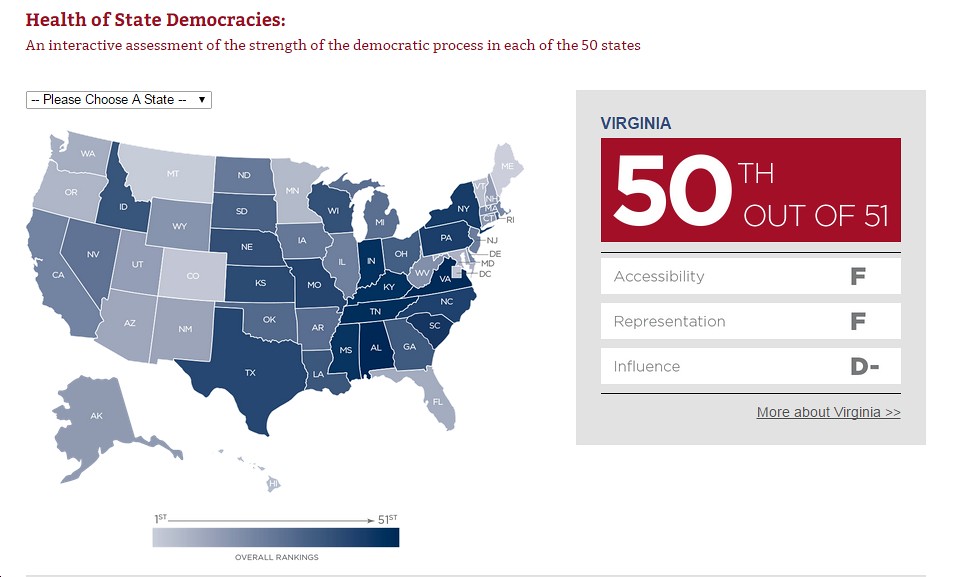 Why is Virginia so godawful in this new report, “The Health of State Democracies,” by the Center for American Progress Action Fund (note: one of the lead authors is former DPVA Executive Director Lauren Harmon)? In short, Virginia scores horrendously – and to anyone who’s followed Virginia politics at all, this is not in the least bit surprising – on three key categories: 1) accessibility of the ballot (Virginia gets an “F”), 2) representation in state government (Virginia gets an “F”), and 3) influence in the political system (Virginia gets a “D-“). A bit more detail on where Virginia fails most miserably includes:

1. We have no early voting in Virginia.

2. We do not have “availability of no-fault absentee voting.”

3. A photo ID is required, for absolutely no good reason (other than Republicans’ mythical “voter fraud,” actually voter suppression), in order to vote in Virginia.

4. Possibly most disgraceful (and racist) of all: “Ex-felon post-sentence disenfranchisement.” We should have gotten rid of that years ago, as most states have done.

5. “There are no processes in place for citizen petitions.”

6. Our Congressional and House of Delegates districts are wildly distorted towards Republicans via insane levels of gerrymandering, making most general elections for House of Delegates and U.S. House of Representatives essentially a foregone conclusion in Virginia.

8. Absolutely no “campaign contribution limits for individual donors.” I’d put this one in second place for “most disgraceful,” although insane levels of gerrymandering are also hideous.

9. Add in no “availability of public campaign financing” and utterly inadequate campaign disclosure laws, and you can see why Virginia well deserves its “F” grades.

I’d add a few more factors, some of which stem from the Byrd machine’s efforts to limit democracy in Virginia to…well, basically as little as possible. First, it is absolutely outrageous that corporations regulated by the state (I’m looking at you, Dominion!) can get away with “capturing” the Virginia General Assembly, State Corportation Commission, and other bodies that in THEORY are supposed to regulate Dominion et al. That is the epitome of “regulatory capture,” or what I’d call “legalized corruption.”

Second, Virginia needs to get rid of odd-year elections and align at least our state legislative elections with the federal cycle. Because what happens in odd/off-year election years like 2011 and 2015 is that turnout drops precipitously, meaning that only the most passionate voters, and in the case of Republicans most extreme, come out to vote. The results are as obvious as they are harmful, a small minority of Virginian elects extremists like Dick Black, “Sideshow Bob” Marshall, and many others.

Finally, we need to seriously revisit the “Dillon Rule,” which prevents cities and counties from doing…well, just about anything. For instance, let’s just say more progressive counties wanted to go beyond Virginia state law in terms of strong environmental protection, more incentives for clean energy, even a carbon tax (revenue neutral or not). Why shouldn’t they be able to do that?  Why shouldn’t Arlington, Fairfax, Richmond, etc. be able to change the names of roads from “Jefferson Davis” or whatever if they want to? In the broadest sense, why can’t at least a bit of power be devolved towards the localities, whose governments are theoretically closest to the people they serve? Oh yeah, another remnant of the Byrd era…sigh.

Rep. Rob Wittman (R-VA01), Who Pushed to Overturn Election, Called Out HARD By Qasim Rashid For Claiming “Today, we witnessed the peaceful transfer of...

VA Sen. Chap Petersen (D?-Fairfax City) Argues It’s Not Worth Closing Schools For 9 Year Olds Because Of the Death Of a 99 Year...

Virginia AG @MarkHerringVA statement on President Biden's repeal of the Muslim ban - a "stain on our country" that has now been removed https://bluevirginia.us/2021/01/inauguration-day-news-joe-biden-to-be-sworn-in-as-46th-president-amid-turmoil-and-loss-trump-presidency-ends-with-400000-covid-deaths-and-disgraceful-pardons-kamala-harriss-inauguratio#comment-5235497411