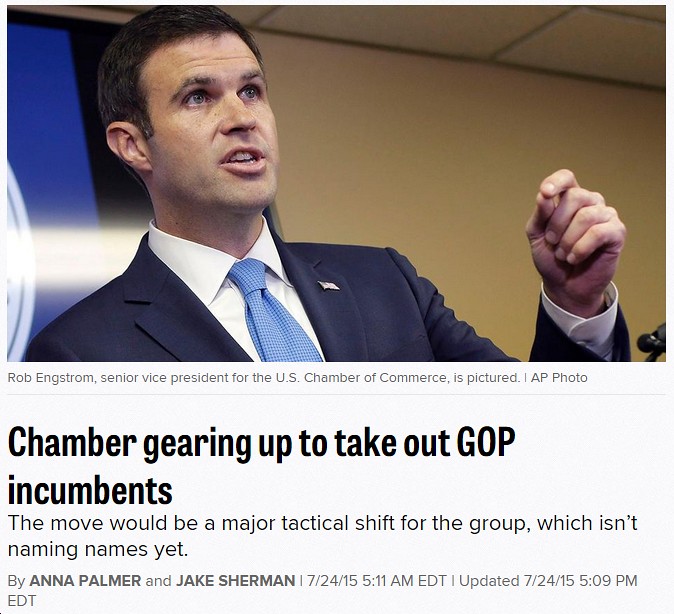 The U.S. Chamber of Commerce – and many of its local affiliates – has for years been acting as little more than an arm of the Republican Party. Now, however, it looks like that might be changing.

The U.S. Chamber of Commerce is gearing up to challenge some House Republicans in primary elections, frustrated after much of its agenda has been stymied by a small pocket of conservative GOP lawmakers.

The influential and well-heeled business group is already eyeing several races, but the plans are still in their infancy and the targets have not yet been decided upon, according to more than a half dozen Republican sources on K Street and Capitol Hill.

The theory is simple: The Chamber spent some $70 million in 2014, mostly to help Senate Republicans build their majority. But many of their legislative priorities – immigration reform, the renewal of the Export-Import Bank and a long-term highway bill – have been held up by a clutch of conservative lawmakers in the House.

Great news, as far as I’m concerned, and I’ve got three suggested targets right here in Virginia, if the Chamber of Commerce is truly interested in going after Republican incumbents who are obstructing their agenda.

1. Bob Goodlatte: On immigration reform, one of the Chamber’s top priorities, one can make a serious argument that Goodlatte has been more responsible than anyone for preventing the bipartisan Senate bill — passed overwhelmingly (68-32) in June 2013 — from becoming law. Since Senate passage, the Teapublican-controlled House has refused to even allow a vote on that legislation, even though (or because) it would almost certainly pass, with close to 100% Democratic support plus a few dozen Republicans. But that hasn’t happened, and it’s in large part due to the obstructionism of Goodlatte, the House Judiciary Chairman who “has contrasted the House approach to immigration reform from the Senate by requiring that the various issues be taken on a piece-by-piece basis with an emphasis on both border and interior enforcement measure.” The result: no progress on this top priority of the U.S. Chamber of Commerce. Recommendation to the CofC: spend your money to oust this pathetic excuse for a Congressman.

2. Dave Brat: This incumbent should be a no-brainer for the U.S. Chamber of Commerce to go afgter, as Brat has been bad on pretty much everything the CofC cares about: immigration reform, where Dave Brat’s No ‘Free Market Guy’ on Immigration; the Export-Import Bank, which he strongly opposes (his reasoning is all screwed up, but click on that link if you want to watch him babble on about it); and the highway bill, where he says his “default vote is no.” C’mon, Chamber dudes, do your thing!

3. Morgan Griffith: This guy is also awful, from a CofC perspective, when it comes to immigration (he says “I will not support that unfortunate Senate bill should it come before me for a vote”). Definitely worth considering for some Chamber money on a primary challenge.

This is by no means a comprehensive list, of course, as several other Virginia Republican incumbents are bad on immigration (e.g., Randy Forbes calls the bipartisan Senate bill “a step in the wrong direction toward reforming our broken immigration system”) and other issues. Still, it would be a good start to replace these right-wing ideologues with more reasonable Republicans, or better yet by Democrats! 🙂