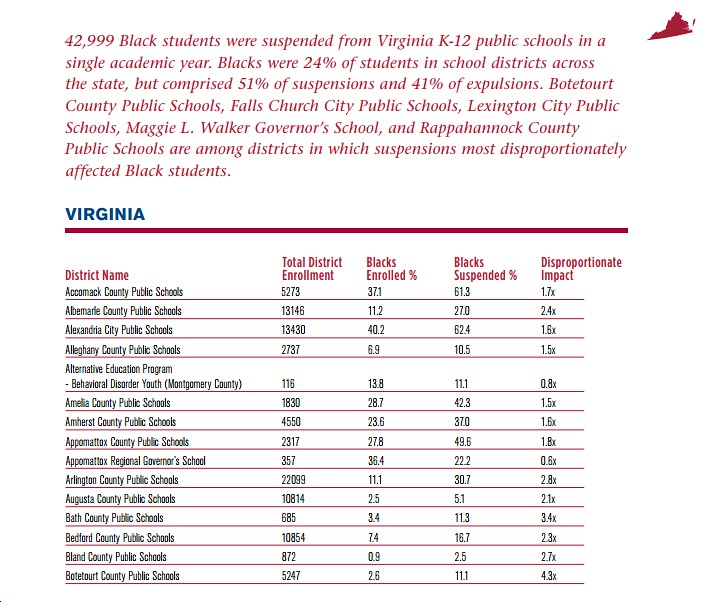 A new study by researchers at my alma mater, the University of Pennsylvania, finds yet more evidence (as if we needed any more!) that racism is far from dead in the United States of America, and certainly not in the South. Check this out:

In 132 Southern school districts, Blacks were disproportionately suspended at rates five times or higher than their representation in the student population.

Here in Virginia, it’s not good either, as “Blacks were 24% of students in school districts across the state, but comprised 51% of suspensions and 41% of expulsions.” In terms of “disproportionate impact,” the report finds that “Botetourt County Public Schools, Falls Church City Public Schools, Lexington City Public Schools, Maggie L. Walker Governor’s School, and Rappahannock County Public Schools are among [Virginia school] districts in which suspensions most disproportionately affected Black students.” For instance, Botetourt’s “disproportionate impact” score in the 2011-2012 school year was 4.3x, while Falls Church’s was 3.8x. Others that jumped out at me were several jurisdictions, such as Fairfax County (3.0x), Loudoun County (3.0x) and Arlington County (2.8x), which trend “blue” politically but still show an unacceptably high ratio of African-American students suspended or expelled relative to their population.

So what’s causing this disparity? According to the authors of the study, it’s exactly what you’d think:

“The findings in our report point to the residual effects of Jim Crow, slavery, and unequal schooling,” Harper said. “They are further explained by poverty trends, structural inequities in the education workforce, and a longstanding history of racial injustice that cyclically reproduces itself, especially across these 13 Southern states.”

What’s particularly unacceptable about this situation is this:

Suspensions and expulsions can carry life-changing consequences for children. They impact academic performance and disrupt pathways to college, but also how a school and community perceive a student.

“It could take years to process through the trauma and stigma of being deemed a problem-that you’re not responsible, not serious,” Smith said. “Teachers and district leaders are signaling that you’re not worthy enough for us to invest in.”