So, let’s get this straight…the Chairman of the Virginia Republican Party, anti-Semitic “joke” dude John Whitbeck, is headlining an event which asks whether his own party can be saved? I mean, are things really THAT bad with the Virginia GOP these days? Also interesting: Whitbeck will be appearing with former Dave Brat for Congress campaign manager Zach Werrell, who had to “scrub” his Facebook page of the numerous inflammatory comments he’d made on there (e.g., “comparing George Zimmerman’s shooting of unarmed black teenager Trayvon Martin to abortion to calling for the abolition of the Food and Drug Administration and encouraging the adoption of the silver monetary standard,” and answered “yes” to the question, “Should sections of States be allowed to secede from a State if they feel they are un/underrepresented in the State Government?”). Sound like a fun event?

P.S. Note to corporate media, can you seriously even imagine an “equivalence” to this in the Virginia Democratic Party? Uhhh….no. 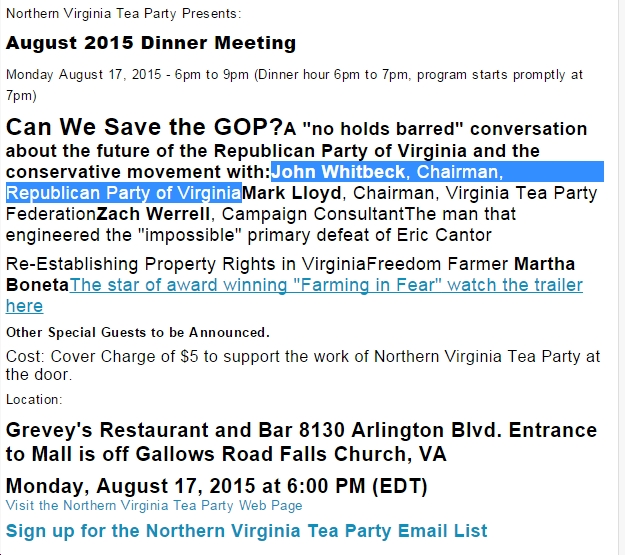