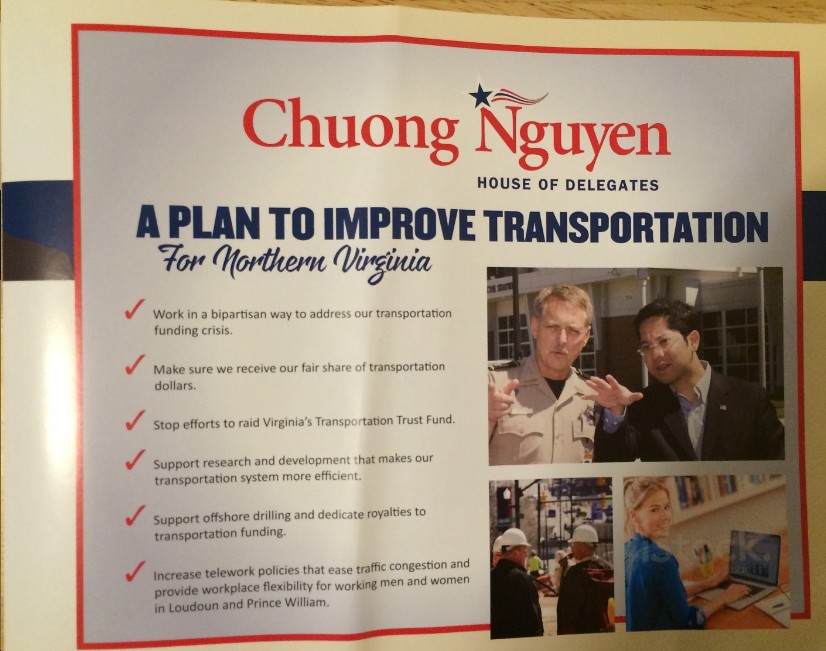 There are three problems with this mailer – click on the image to “embiggen” – for Republican Chuong Nguyen. FYI, Nguyen is running to succeed far-right-wing Del. David Ramadan (who’s stepping down) in the 87th district – Loudoun/Prince William Counties – against Democratic nominee John Bell:

1. The stock photo in the mailer still has the “iStock” print across it in the bottom right. Seriously? So much for having any kind of thorough process for designing/proofing/approving mail. The fact that this actually got mailed out shows, at the least, a lack of attention to detail on his team’s part (and ultimately on his, since he’s in charge!). Also, why would Nguyen’s campaign use stock photos in his mail, as opposed to a photo of someone who actually lives/works in his district (the 87th), let’s say? It’s strange…also just sloppy and lame, frankly.

2. More substantively, Nguyen mentions that he would “work in a bipartisan way to address our transportation funding crisis.” Oh really? So…does that mean he would have supported the 2013 transportation bill (a hated “tax increase” according to many Republicans, let alone Tea Partiers)? Or would he end up being just like the district’s current Delegate, David Ramadan, who hypocritically loved to take credit for transportation projects even as the  voted against their funding? My guess is the latter.

3. We’ve been over this and over this, but it’s apparently a zombie lie that won’t die among Republicans: the concept that there will be “dedicated royalties” from drilling off Virginia’s coast that can be used to fund transportation. For a good takedown of this b.s., see Chap on the “Fraud” of “Oil Drilling Royalties”, which explains that: a) “it’s not certain that there are any petroleum deposits which can be tapped cost-efficiently;” b) “any future off-shore drilling will take place in waters belonging to the U.S. — not Virginia;” c) “Congress…rejected the concept that coastal states like Virginia would receive royalties from new drilling off our coastline;” and d) “In summary, this is a train going nowhere.” Nice try by the Nguyen campaign, though; play again! LOL

By the way, this district is most certainly a winnable one for Democrats this November, as Terry McAuliffe beat Ken Cuccinelli here by 11 points 53%-42%) in 2013, and Mark Warner beat Ed Gillespie in 2014 by 6 points (52%-46%). Also note that Del. Ramadan defeated John Bell here in 2013 by less than a percentage point, and now with Ramadan stepping down, there’s no incumbent advantage to battle against.