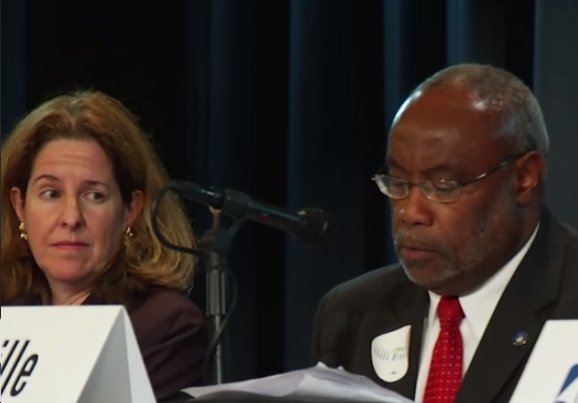 I had two interesting chats today with Northern Virginia Democratic politicos regarding the Alexandria mayoral and City Council races. I thought they were worth passing along, edited for length and flow. First, here’s a response – from someone who knows a lot more about Alexandria politics than I do! – to my questions regarding what Democratic nominee Allison Silberberg means when she talks about “appropriate”/”to scale” development, and more generally about how the Mayor’s race might play out. Also note that this person is a Silberberg supporter, so put these comments in that context.

It is definitely at the margins.  I don’t think Allison is anti-development. She’s not anti-commercial buildings. She just wants more careful review before something happens. And I don’t think it’s partisan, although I do think Bill actually is more pro-business than Allison. Remember he’s a developer himself.

And at the end of the day, the Mayor is mostly just a glorified City Councilperson. Just one vote. No veto. And much of the City Council supports substantial development. So Allison might get outvoted a lot as Mayor. We’ll see how good she is at consensus building; that’s still an open question. Allison’s election might give City Councilmembers some pause about development, but much of it has been done or is in the planning stage already. I suspect Allison would mostly affect new and additional development.

I would guess that substantially more voters in the eastern half of the city share Allison’s vision of development than Bill’s. Kerry Donley, a west ender, got most of his votes from the west end. If his influence is large, and if west-end voters care less about historic preservation than those in historic east Alexandria communities like Old Town and Del Ray, Bill could make a real race of this. Without Kerry’s endorsement, he’d be toast. With it, he does have a fighting chance, although I still don’t think he’ll win.

I don’t really have a strong feel for Alexandria Republicans. I would talk to more (and less partisan) Republicans than Alexandria GOP Chair Chris Marston to get an idea. No doubt some business people support Bill Euille’s development vision and would like to stick it in the eye of the Alexandria Democratic Committee. But no doubt some old, rich, Establishment Republicans who’ve lived in Old Town for decades prefer slower development over fast change and chafed under Euille’s 12 years as Mayor.

I will say this: apart from development, when it comes to civil rights, affordable housing, the environment, etc., I think Allison is a solid Democrat and Bill mostly as well.  (It’s just that I could see Bill “selling out” on, say, a business v. environment question.)

Now, here are some thoughts from another Northern Virginia Democratic politico about how Bill Euille’s write-in campaign might impact the Alexandria City Council races, specifically the potential to increase turnout among Republicans and possibly cost Democrats a Council seat or two (or three or…).

I’m not worried at all. This will energize Democrats on both sides; I don’t see any upside for the Republicans. I predict Euille narrowly wins and the Democrats sweep the City Council. Coming to vote for one Democrat (Euille or Silberberg) over another isn’t gonna be a huge driver for Republicans, and there are not that many in Alexandria anyway. If Silberberg backs the Republicans running for City Council, she guarantees that Euille wins. And if she doesn’t back the Republicans running for City Council, then why would Democrats turning out for her vote for them?…Euille running will probably bring out more African Americans than would have turned out if he had been the nominee or had not run as a write-in. I think the bigger risk would have been having a Democratic nominee most Democrats weren’t excited about. So, if Euille had endorsed Silberberg tepidly and moved on with his life, then I could see Democratic turnout being so poor that you could end up with a couple more Republicans on the City Council. Now we have a race; people vote when there is a race more than when there isn’t one.

Interesting stuff, IMHO. What do you think?