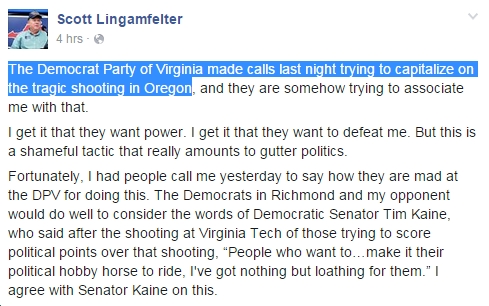 For those of you not familiar with him, Virginia Del. Scott Lingamfelter is a far-right-wing Republican (mis)representing the 31st House of Delegates district (parts of Prince William, Fauquier Counties). This is a “purple-ish” district which Mark Herring won narrowly (51%-49%) in 2013 and which Mark Warner lost narrowly (50%-48%) in 2014, so you’d think that Lingamfelter might be interested in moving just a weeeeee bit to the center. But noooooo…this guy’s as big of a right wingnut as any in the Virginia General Assembly, among other things an “Agenda 21” conspiracy theorist and global warming denier. In other words, the guy’s a bit…uh, “out there,” let’s just put it that way.

With that, I guess we shouldn’t be surprised at his latest wackiness (see screen shot of Lingamfelter’s Facebook post), accusing the “Democrat [sic] Party of Virginia” of making “calls last night trying to capitalize on the tragic shooting in Oregon.” The ever-creative Lingamfelter also somehow tries to drag Sen. Tim Kaine into this, taking a comment Kaine made eight years ago – and also completely out of context – to try and gin up hysteria against the supposed “gutter politics” by Virginia Democrats. I checked with DPVA Communications Director Stephen Carter, and also spoke with Sen. Kaine’s office, and basically confirmed what I first suspected: Lingamfelter is totally pulling this stuff out of his butt. A few points.

1. According to DPVA, they didn’t do any “calls last night trying to capitalize on the tragic shooting in Oregon.” Or anything even remotely resembling such a thing. Again, Lingamfelter’s just making stuff up out of whole cloth.

2. According to DPVA, the Virginia House Democratic Caucus likewise didn’t make any “calls last night trying to capitalize on the tragic shooting in Oregon.” Or anything even remotely resembling such a thing. Sensing a pattern here?

3. No other component or arm of the Virginia Democratic world made any “calls last night trying to capitalize on the tragic shooting in Oregon.”

4. As for Sen. Kaine, the comment Lingamfelter cites was made 8 years ago, in the aftermath of the Virginia Tech shootings. Of course, Lingamfelter takes that one completely out of context as well, turning the meaning around in the process. Here’s an excerpt from a fact check by Media Matters from 2007, entitled “Fox’s Angle falsely suggested Kaine condemned Moran’s comments on gun control.”

In fact, Kaine was not responding to Moran or even addressing gun control advocates in general. Rather, he was answering a reporter, during an April 17 press conference in Blacksburg, Virginia — before Moran made the statement Fox aired — who appeared to be asking about the argument by “pro-gun lobbyists” that Virginia Tech students should be allowed to carry guns.

In response to the question, Kaine made a blanket assertion that the shooting in Blacksburg was not “a political hobbyhorse or a crusade or something for a campaign or for a fundraising mailing.”

Riiiight, so Kaine was responding to a question about PRO-gun lobbyists, and his statement was about making the Virginia Tech shootings the basis for a fundraising email or campaign by said lobbyists. Neither of which any arm of the Democratic Party of Virginia (or its sister organizations) did last night, as Del. Lingamfelter wildly and erroneously charged. #FAIL all around, except perhaps in revving up his rabid, right-wingnut “base?”

P.S. Of course, Lingamfelter is part of the same party with presidential candidates who just blatantly lie (e.g., Carly Fiorina’s imaginary scene from the anti-Planned Parenthood hit videos by anti-choice extremists) and then, when called on their lying, simply double down with more lies. Obviously, Lingamfelter fits very well into that party, which is a frightening thought in and of itself. Let’s just hope this guy loses on November 3 to Democrat Sara Townsend.