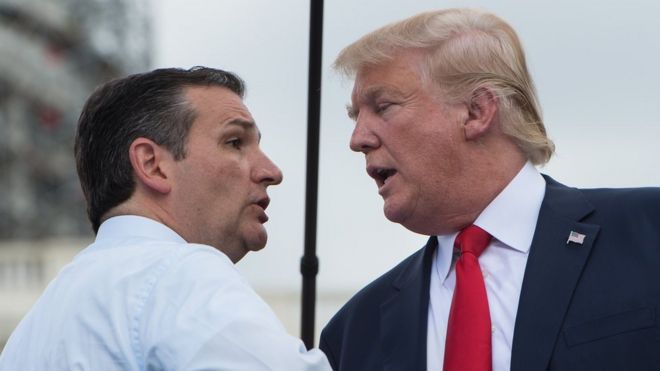 For years, there’s something that we Americans have urgently needed to see. If now isn’t a teachable moment – what with the spectacle of the Republican presidential race before us – I don’t know what would be.

We can begin with Trump as a flagrant piece of a much bigger picture.

Consider what it means that the British parliament lately debated the question of whether Donald Trump should be banned from Great Britain. Britain– perhaps the United States’ greatest friend, our “special relationship” for the better part of a century. And Donald Trump– the front-runner of one of America’s two major political parties.

That such a debate would occur sends an inescapable message: Something has gone seriously wrong with the Republican Party.

How should we understand what’s gone wrong?

That Trump is the frontrunner tells us we must look past Trump as an individual, for if he weren’t getting massive support from the Republican base, his candidacy – however distasteful – would be of no importance.

The support Trump gets from the base demonstrates that he is expressing what they feel and how they think. So, in excavating what’s gone wrong, the next level down lies in the thoughts and feelings of the base.

Trump’s basic message is, “Let’s beat our enemies.” And they applaud his belligerence because they feel besieged and filled with rage. That Trump’s pronouncements are detached from reality reflects that this base doesn’t think hard to distinguish what’s true from what’s false, or what makes sense from what’s nonsense.

But the answer can’t stop at the base. The question, “How did the base get that way?” takes us to a bigger picture in which many of the components of the political right play a major role.

We can go back to Rush Limbaugh and Newt Gingrich who demonized “librels” and taught that defeating “enemies” — and not finding ways of working together to achieve a common purpose – is what the political drama is all about.

We can go back to the emergence of Fox News and the rise of the GW Bush presidency, both of which cultivated fear in their followers, and worked assiduously to detach their followers from reality. With phony issues like “the war against Christmas” – right-wing media taught their people to perceive the world as filled with forces hostile to their basic values. With the denial of climate change, they rendered even scientific knowledge impotent to challenge a political orthodoxy based on lies.

We can look to the continuous Republican effort to stir up resentments and fears directed against undocumented immigrants — even while the influx of such people stopped and even reversed — and to inflame old racial hostilities by peddling an image of President Obama as a Kenya-born “food stamp president.”

We can look to the Republicans in Congress whose across-the-board obstructionism led their followers to care only about the struggle for dominance, and not about achieving results to improve the nation.

So if Trump is a mirror of the base, and the base has been shaped over decades by a whole network of forces comprising the political right, what’s gone wrong in the Republican Party is something much larger and deeper than the man our best friends have found so offensive to basic values of democratic civilization.

It is bigger not just because almost the entire rest of the Republican field has vied with each other to tap into the same rage and resentment and fear and lack of constructive orientation as Trump. And not just because the other candidate now seriously in the running – Ted Cruz – is a man (disliked, it seems, by most everyone he works with) who has shown no loyalty to anything but his own quest for power.

It is bigger because what we see now brings into clear relief the nature of the spirit that has driven the political right for a generation.

It’s not just that the powers of the political right have been, for years, creating today’s unhinged Republican base. The fabric of cause and effect, in the emergence of today’s political right, is much more densely interwoven than that.

• In the vitriol of the right-wing media, which systematically misinforms and enrages its followers.
• In the refusal of the Republican Party to respect the legitimacy of the power that the people give to the other party.
• In the presidency (Bush-Rove-Cheney) that lied the nation into a war, condoned torture, and (e.g. with the torture memo) subverted the rule of law.
• In the advance of an anti-democracy agenda by the Koch Brothers, who have translated private wealth into ownership of government beyond anything seen before in American history.
• In the conduct of an opposition party in Congress that, in an unprecedented way, put making the president fail ahead of doing the people’s business.

In the past, the fundamental and systematic thrust of this force – which is to break down what’s best about America – was more obscured behind the suits and trappings of normal politics. (Mitch McConnell speaking obstructionese expressed the same insistence on conflict and obsession with power as Trump’s strutting bellicosity, but it sounded more like normal politics.)

What makes this ugly race for the Republican nomination a teachable moment is not that something new has emerged on the right. But rather that something that has been animating the political right for years is now revealed to us in a more flagrant form.

If we can’t see it for what it is now, when it stands before us naked, when will we? And if we don’t see it, how effectively are we likely to fight and defeat it?

This is a teachable moment. Let’s seize it.

(Showing how such coherent forces of destruction arise, operate, and transmit their patterns through time in civilized systems is the purpose of my new book, WHAT WE’RE UP AGAINST: The Destructive Force at Work in Our World—and How We Can Defeat It.)