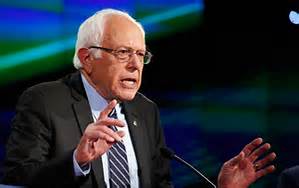 I agree with those who say that Democrats choosing between Bernie and Hillary should give the matter of electability top priority. That is particularly true with Donald Trump the likely GOP nominee (and hardly less true if it were to be Ted Cruz.)

Given the delegate math, Bernie would apparently need for the superdelegates to conclude – by the time the convention rolls around – that it is he, not Hillary, who is the best bet for keeping Donald Trump away from the Oval Office and the nuclear football.

How can Bernie make a persuasive case that he is the more electable candidate?

“Momentum” is not going to suffice. Nor is the intensity of the enthusiasm of his supporters, which has led to so many lopsided Sanders victories in the states that hold caucuses instead of primaries. The general election is an even broader electorate than the primaries, and lukewarm votes count as much as those cast passionately.

But there is a case that can be made, and made before the Democrats convene in July.

I have previously argued that Bernie should shift the focus of his campaign onto attacking Trump and the Republicans generally. This strategy, in addition to fostering greater Democratic unity for the fall (regardless of who the nominee is), would enable Bernie “to prove himself the ideal political warrior to stand up to Trump and bring him down.”

But there’s another important reason why Bernie should work now to provoke fights with Trump and the right-wing.

To make the case for his superior electability, Bernie and his supporters point to polls showing him beating all the Republicans by larger margins than Hillary does. But whenever anyone makes that argument, I have observed, there comes the entirely plausible counterargument:  the reason the national polls favor Bernie now is because he has never had to withstand the kinds of attacks from the right that Hillary has endured for years.

If Bernie got the nomination, this argument goes, the right-wing attacks on Bernie would be unleashed and down would go his numbers in the polls.  Hillary’s numbers, by contrast, already show the impact of decades of right-wing smears. So she is the safer bet.

If the question of how vulnerable Bernie is to right-wing attacks is still hanging out there, unanswered, at the time of the Democratic convention, how likely is it that the risk-averse superdelegates will choose to go with Bernie?

That’s why Bernie should do all he can to remove such uncertainties before the convention. This he can do by drawing fire from the right, now.

He has nearly four months between now and the convention to get under the skin of Trump and all the other powers on the right and provoke them to attack him in their predictably low-blow ways. (Already, in the context of his efforts to blame Sanders supporters for disturbances at a campaign rally, Trump referred to Bernie as “our communist friend.”)

If Bernie can draw such fire from the right-wing now, and if he can demonstrate before the convention that he can withstand such assaults and even turn them to his advantage — maintaining or even boosting his standing in those national match-up polls — he can help clear the way for superdelegates to switch their support to him.

So Bernie has two good reasons for going after Trump and the GOP now, ahead of the convention. If he can best them in rhetorical combat now, he can show the delegates his greater strength — with the blows he lands (on Trump, or whomever) — as a standard bearer for the general election. And if he can demonstrate skill in parrying their attacks on him, he can reduce his apparent vulnerability for the fall contest.