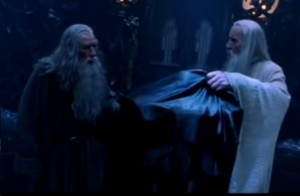 I read It’s Over Gandalf. We Need to Unite Behind Saruman to Save Middle Earth from Sauron!, and as a huge Tolkien fan, I found it neither accurate nor particularly amusing. For starters, it’s worth noting that Tolkien absolutely hated making the kind of allegorical comparisons in which, let’s say, the Ring is the atomic bomb, Sauron is Hitler, blah blah. But even if he had liked such comparisons, Tolkien certainly would not have liked this crap.

Gandalf had the crazy idea that some little hobbits could stand up to and defy the power of the billionaire class Dark Lord Sauron. But I guess that was a pipe dream after all.

Gandalf failed. He got his ass locked up atop Saruman’s tower when he foolishly defied the head of the Democratic Party council of wizards. And now that he’s locked up it’s not like some eagle is going to magically appear and rescue him. It’s over. And now Saruman is our only hope against Sauron.

We need to stop saying nasty things about Saruman or it will be difficult to rally the people of Middle Earth to his side. Here are some things we should no longer mention, or if we do, we should put a positive spin on them so people will still see Saruman is our only hope.

Uhhhh…no. Just no. Why not? Let’s start with the absurd Gandalf=Bernie Sanders analogy. In fact, Gandalf the Grey — later Gandalf the White — had almost no hope that the hobbits could “defy the power of…the Dark Lord Sauron.” Recall Gandalf’s surprise and dismay when he realized that the ring Bilbo found while groping in the dark tunnels of the goblins in “The Hobbit” was actually the “One Ring” of the Dark Lord Sauron. Also recall that Gandalf did not understand WHY the “One Ring” had come to Bilbo and then Frodo, remarking that the ring somehow “chose” the hobbits, “not for any merit that others do not possess: not for power or wisdom, at any rate.”

Note further that Gandalf refused the One Ring when it was offered to him by Frodo, because Gandalf knew that even one as great as he could not be trusted with such power. And recall that at the Council of Elrond, the matter of what to do with the One Ring was thoroughly discussed, and the conclusion was that the ONLY option was to send it back to the fire from which it came, and that nobody else could carry the One Ring back there but Frodo, the one chosen — by the One Ring itself — as the Ring Bearer (although not alone, but with a “fellowship” of men, a dwarf, an elf, a wizard and hobbits).

So, bottom line, it is simply absurd to claim that Gandalf had “the crazy idea that some little hobbits could stand up to and defy the power of the billionaire class Dark Lord Sauron.” To the contrary, Gandalf felt that it was a desperate and quite possibly hopeless endeavor,  but what other choice was there?

As for the comparison of the “billionaire class” to Sauron, that’s quite a stretch, even for satire/snark on a blog. Recall that Sauron was basically evil incarnate, with enormous powers and a monomaniacal desire for world domination and subjugation. Whatever the “billionaire class” is, it most certainly is NOT at least two main things that Sauron most certainly was: 1) unified or monolithic in its goals; 2) unified or monolithic in its political ideology.

On that second point, note that the world’s richest man, Bill Gates, is most certainly NOT a right wingnut, nor is someone who plans to give away almost all his money to charity evil incarnate, for god’s sake. Nor is the #3 richest man, Warren Buffett, who has endorsed Hillary Clinton. Nor is the #5 richest man, Jeff Bezos, who seems to be a libertarian of some sort — not the nicest guy by any means, but certainly not evil incarnate. Nor is #6, Mark Zuckerberg, again absolutely NOT a right wingnut. Nor is #8, Michael Bloomberg, who is a social liberal and an environmentalist. Nor are #12 or #13 (Larry Page and Sergey Brin of Google) — both fans of Barack Obama and also huge proponents of clean energy.

The point is, the “billionaire class” is a mixed bag, with good people in there, a bunch of complicated/mixed people, and a few really bad ones like the Koch brothers (now THOSE guys would make sense as evil characters, maybe Nazgul or something like that, in the Lord of the Rings!). But to compare the “billionaire class” (again, what IS that anyway?) to Sauron is, to put it mildly, an overstatement.

As for the concept that “Gandalf failed,” clearly this person hasn’t read the Lord of the Rings. Note that in the book, Gandalf actually escaped from Saruman’s prison in Orthanc, after which he led the resistance to Sauron and came out victorious in the end (with a little help from two courageous hobbits and, ironically, Gollum of all people). How did Gandalf do that? By rallying the forces of good, by fighting back hard and effectively against the forces of evil – even when all seemed hopeless/lost – and by keeping Sauron distracted from the mortal threat posed by Frodo’s and Sam’s slow, grueling plod to Mt. Doom, giving Frodo and Sam the slim chance of fulfilling their quest.

Getting back to the analogy, although it appears that Bernie Sanders will not personally make it to the White House, he can still be victorious in a broader sense if he helps give other Democrats running in 2016 – for president, Senate, House of Representatives, state offices – what they need to win. First and foremost, Sanders can continue injecting the populist, progressive energy and ideas he’s brought to the 2016 race all the way through November, helping rally the forces of good against the forces of darkness (Trump, Cruz, etc.). But no, it doesn’t mean that Sanders needs wizardry or to be reincarnated as Bernie the White, simply that he fight the good and courageous fight, perhaps more like Faramir or Theoden or whoever.

As for the analogy that Hillary Clinton is somehow like Saruman, that shows a fundamental misunderstanding both of Clinton and Saruman. Saruman, of course, was one of the greats, but ultimately was corrupted by the lust for power – and by the fear of being dominated by an even greater power and an even greater evil, Sauron. In his corruption, Saruman caused a great deal of death and destruction, and in the end could not be redeemed. In stark contrast, Hillary Clinton has basically been a mainstream centrist/progressive Democrat, working to make things better for people, even if she’s too “corporate” for many progressives. But is there any evidence that Clinton has fallen from greatness into corruption and evil? Uh, no. Is there any evidence that she isn’t who she’s always seemed to be — a mainstream, centrist/progressive Democrat? Again, no. If anything, what we’ve seen during this campaign and over the past few years is Clinton moving, albeit by fits and starts, in a more progressive direction. In that respect, I guess Clinton is almost the antithesis of Saruman, who moved very much in the wrong direction as time went by and as evil’s power rose (note that Saruman was trying to set himself as a potential rival evil power to Sauron, which of course is completely bonkers). But no matter how you look at it, the Clinton/Saruman analogy is just laughably absurd, not to mention offensive, on every level.

As for Donald Trump being Sauron, that’s also absurd. Yes, Trump is horrible, but he’s more Saruman than Sauron — not always evil (or at least not always as evil in the past as he is today), but clearly willing to do or say whatever to gain power for himself (including through his Wormtongue-like apologists and spokesmen). Also, note that Saruman was a great showman, able to mesmerize crowds by the sound of his voice, even if people didn’t even really know what he was saying exactly. In contrast, Sauron didn’t speak at all, other through a nameless/faceless mouthpiece or perhaps via his servants, the Nazgul and others. For Trump, it’s all about being out there in front of crowds and TV cameras, which would be a lot more to Saruman’s liking — although even that analogy fails, ultimately – than to Sauron’s. So this is ridiculous as well.

I could go on and on, but I think you get the point. Perhaps I’ll just conclude by yet again noting Tolkien’s disdain for allegory. Back in his time, it was people trying to shoehorn the Lord of the Rings into the fight against Nazism (or possibly Communism). Today, perhaps people want to make it Sauron/Trump, Sanders/Gandalf, Hillary/Saruman or whatever, but that’s equally wrong-headed. In the end, how about we stop wasting our time arguing about the best analogies/allegories for the 2016 campaign, and instead spend our time focusing on how we’re going to: a) hold the White House; b) take back the Senate and House; c) win governorships and state legislatures back from Republican control; and d) hit the ground running in January 2017 with a strong progressive agenda for a country in desperate need of one?