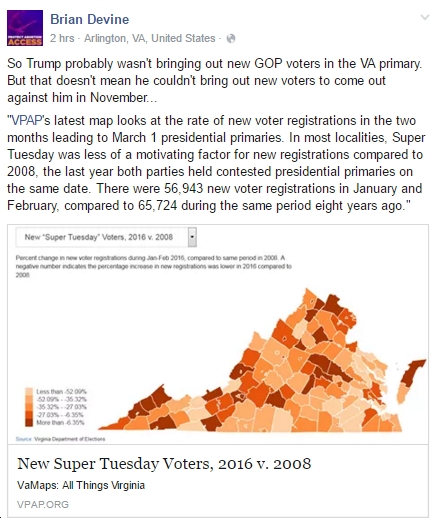 Of the many stupid, false or misleading things you’ve heard this presidential election cycle, there’s the refrain from Donald Trump about how he’s brought out “millions of new voters” to the polls, blah blah blah. Yesterday, the Los Angeles Times took a whack at that whopper, along with other “myths” (e.g., that turnout in the primaries has any correlation to turnout in the general election), and found:

…increasing turnout in a Republican primary isn’t the same as drawing new people into the GOP. A large majority of voters every year sit out the primaries, so increased primary turnout usually means exciting existing partisans, not creating new ones. Exit polls indicate that’s what has happened this year, as in previous turnout surges in both parties.

Late last month, the Massachusetts secretary of state got a lot of attention by reporting that about 16,000 people had changed their registration from Democratic to Republican in the weeks before the state’s primary. But that’s hardly millions, nor is it unprecedented. The share of voters in that state’s GOP primary who identified themselves as Democrats on the exit poll was 5% this year, was almost identical to the 4% from four years ago.

In Iowa’s caucuses this year, Trump clearly did well with first-time participants. The share of voters taking part in the state’s caucuses for the first time rose from 38% in the 2012 exit poll to 45% in 2016, and Trump won the first-timers handily. In New Hampshire, by contrast, the 15% of voters casting a GOP primary ballot for the first time this year was only marginally higher than the 12% four years ago, and Trump’s share of their votes, 38%, was only slightly better than the 35% he got among repeat voters.

So much for that claim, in other words. Now, VPAP has taken a look at “the rate of new voter registrations in the two months leading to March 1 presidential primaries” here in Virginia. VPAP’s findings:

In most localities, Super Tuesday was less of a motivating factor for new registrations compared to 2008, the last year both parties held contested presidential primaries on the same date. There were 56,943 new voter registrations in January and February, compared to 65,724 during the same period eight years ago.

It’s interesting to drill down a bit into the VPAP map. What you’ll find is major DECREASES in new voter registrations in a number of places where Trump did well on “Super Tuesday” 2016. For instance, Trump dominated in most far-SWVA counties (e.g., he won Scott County by 50%-20% and Buchanan County 70%-14%), yet all that supposed enthusiasm for Trump was NOT reflected in new voter registrations in those counties (Scott County was down 33% from 2008; Buchanan County was down 4.5%; Russell County was down 29%; Tazewell County down 37%; Smyth County down 32%). In other words, if anything, there was a strong NEGATIVE correlation between big margins by Trump and new voter registrations, at least in far southwestern Virginia. Same deal in Highland County, Rockbridge County and Bath County in the Shenandoah Valley region. Same thing for Buckingham County (down 47%) and Nelson County (down 38%), both big Trump areas in central Virginia.

We could go on and on, but you get the idea…there’s simply no truth to Trump’s claim that he’s bringing out reams of new voters, certainly not here in Virginia. To the contrary, if anything it appears that new voter registration was way DOWN in areas of Virginia where Trump did particularly well. Yeah, things that make you go “hmmmm.”

P.S. h/t to Brian Devine, formerly with Progress Virginia and now with the DCCC, for pointing the VPAP analysis out to me!