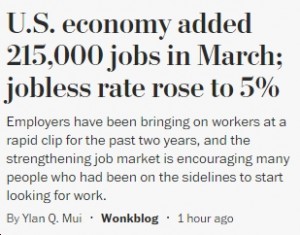 You know how 2016 Republican presidential candidates are constantly talking about how America “doesn’t win anymore” (Trump — FALSE!); how we are supposedly seeing “crushing [economic] stagnation” and “small businesses going out of business in record numbers” (Cruz — FALSE!); how Obamacare is supposedly a “job-killing law” (Rubio – FALSE!), etc, etc? Clearly, it’s basically all either “pants-on-fire,” “four Pinocchios,” or just plain “false.” Yet they keep saying it, like a mantra, despite month after month of evidence to the stark contrary.

Let’s take this month, for instance: the U.S. economy yet AGAIN added jobs, and lots of ’em. As the White House reports, “The private sector has now added 14.4 million jobs over 73 straight months of job growth, the longest streak on record, and wage growth has accelerated over the past year.” So yeah, we’ve almost completely dug our way out of the horrendous Great Recession inherited from the Bush/Cheney administration, and the U.S. economy is now the envy of the rest of the world. Yet if you listen to Republican 2016 presidential candidates, we are DOOOOOOOMED! Not because of out-of-control global warming, which actually DOES constitute a dire threat. Not because of income inequality, which really IS a big problem. Not because of racial injustice and many other social ills we’ve been facing for decades if not centuries, and which of course need to be dealt with. Republicans deny or minimize all of those things. But made-up crap about how America’s economy has been stifled by “job-killing regulations,” “job-killing Obamacare,” blah blah blah? Oh yeah, Republicans are all over that idiocy.

Again, the real story is that since Barack Obama took office, we are far better off on almost every indicator: stock market WAY up, historic employment growth, an unemployment rate that has plummeted, super-cheap oil and gas prices, a boom in clean energy, significant action on climate change (the #1 threat facing humanity, by far), the budget deficit sliced by $1 TRILLION per year, millions more Americans with health care coverage, on and on. The frustrating thing is to imagine how much further along we’d be if it weren’t for the Tea Party takeover of Congress in 2010, and the overall Republican decision to “make Obama fail” rather than put the good of the country over super-cynical and super-irresponsible hyperpartisanship.

Given all this — not to mention the disastrous Bush/Cheney administration and the insane GOP frontrunner’s rhetoric on “punishing women,” immigrants being a bunch of “rapists and murderers,” etc,, etc.  — what boggles my mind is that anyone would even consider voting Republican in 2016. Sure, I get it if you don’t like Hillary Clinton or Bernie Sanders for whatever reason(s), but that doesn’t make it at all comprehensible why you’d vote for Trump or Cruz (who’s possibly even more extreme than Trump) or Ayn Rand-worshiping Paul “Lyin'” Ryan or whoever. Because even if you don’t like Clinton or Sanders for whatever reason(s), a vote for Trump or Cruz (or Ryan, if it comes to that) would be a vote to return to the wildly failed policies of the past, a vote to kill the progress we’re making and send us sharply into reverse on almost every front.

Why would anyone do that? I mean, fine, if you don’t like Hillary or Bernie, then stay home. Vote Libertarian. Or hell, hold your nose and vote for Hillary or Bernie in November. But under no circumstances can anyone justify voting for Trump or Cruz (or Ryan, if it comes to that). Unless, that is, your goal is create the nightmare scenario those guys keep talking about, one which does NOT exist now but almost certainly would if, god forbid, they ever made it to the Oval Office. Shuddderrrr…

P.S. I love the top-rated comments on the Washington Post article about the jobs report.