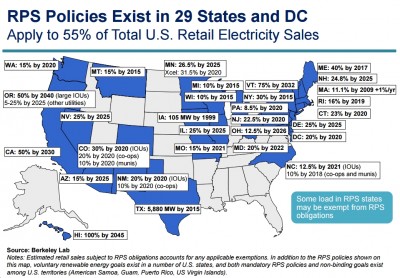 Of course, this new report by Lawrence Berkeley Laboratory won’t convince Virginia’s large contingent of clean energy bashers, fossil fuel apologists and climate science deniers (almost all of whom are Republicans), but for the rest of us, it should provide more ammunition in support of cranking up Virginia’s clean energy ambitions big time. Here are a few highlights from from the report (“U.S. Renewable Portfolio Standards 2016 Annual Status Report”).

But wait, you say, won’t that mean higher costs for power consumers? Uhhhh….no. To the contrary,

…the economics of renewable energy are drastically improving.

Solar power is a technology, not a fuel, so efficiency increases and prices fall as time goes on, reportsThe Economist.

So renewable energy is getting cheaper all the time, independent of oil prices, according toMcKinsey.

The cost of solar power has fallen to 1/150th of its level since the 1970s, while total solar installation has increased 115,000 fold, reports ETF Trends.

Developments like the Tesla Powerwall, and other rechargeable batteries have also smoothed over the inconsistency of solar power when the sun isn’t shining.

The story is similar for wind.

It’s no wonder that “Wind and Solar Are Crushing Fossil Fuels,” with “[c]lean energy investment [breaking] new records in 2015 and…now seeing twice as much global funding as fossil fuels.”

Which brings us to our own fine state, Virginia, and its deplorable record when it comes to seizing the enormous opportunity of the burgeoning clean energy revolution. Here in Virginia, you’ll note from the map, doesn’t even have a serious (e.g., mandatory, aggressive) RPS at all. But it’s much worse than that. Here in Dominion-bought-and-paid-for Virginia, it’s pretty bad – ok, pathetically awful — no matter how you look at it when it comes to clean energy policy.

The past year has seen a lot of activity on wind and solar in the Old Dominion, and yet Virginia lags further than ever behind neighboring states in installations to date...

…Virginia’s utility model is built on monopoly control and large, centralized generating systems, and this model does not serve 21stcentury needs and technologies.

Virginia still has no utility scale wind or solar projects and very little in the way of customer-owned and other distributed generation….

…With one very narrow exception for commercial customers, Virginia residents can’t pick up the phone and call their utility to buy electricity generated by wind and solar farms. Worse, they can’t even buy renewable energy elsewhere...

Virginia’s Renewable Portfolio Standard (RPS) is a miserable sham...There appears to be no appetite in the General Assembly for making the RPS mandatory, and even efforts to improve the voluntary goals have failed in the face of utility opposition…

…Dominion Power and Appalachian Power are at the forefront of a national pushback against policies like net metering that facilitate customer-owned generation.

So yeah, Virginia’s energy policy is beyond abysmal. And this past General ASSembly session didn’t make matters any better, with many fine bills on energy and the environment killed in the dark of night in Republican-controlled committees and subcommittees.  There’s also this piece of crap (“HB 2 Clean Power Plan; state implementation plan, General Assembly approval.”) by Del. Israel O’Quinn (R-Coal). This monstrosity passed the House and Senate on party-line votes, but mercifully has now been vetoed by Gov. McAuliffe. Just imagine if Ken Kookinelli were governor? Or if Ed Gilliespie is elected governor in November 2017? Yeah, it’s hard to imagine things getting worse in Virginia when it comes to energy policy, but with a Republican-controlled legislature and Gov. Gillespie (or Cooch or Rob Wittman), it would get even (much) uglier than it already is. Let’s make damn sure that doesn’t happen!

.@NMDEMS and @vademocrats: Ronchetti and Youngkin Team Up Against Abortion Access (Ronchetti's an NRA-endorsed candidate who brags that he's a “proud conservative who supports President Trump”) https://bluevirginia.us/2022/10/dpnm-and-dpva-ronchetti-and-youngkin-team-up-against-abortion-access