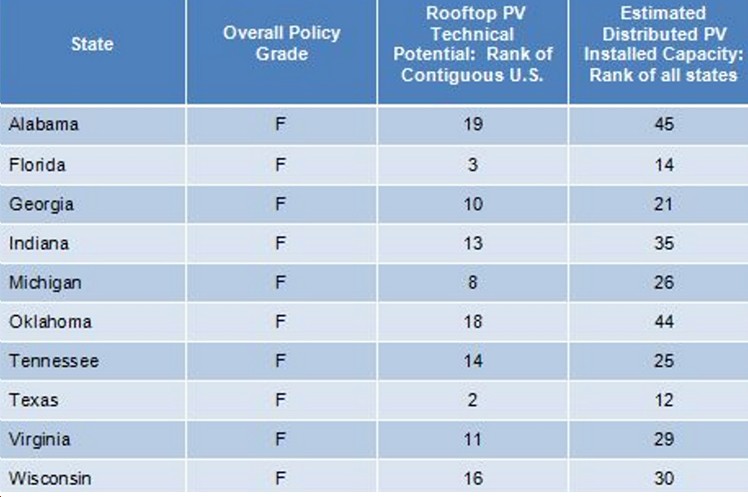 Needless to say, this is not something Virginia should be proud of.

For this report, we analyze and highlight 10 states that are blocking distributed solar potential through overtly lacking and destructive distributed solar policy. These 10 states — Alabama, Florida, Georgia, Indiana, Michigan, Oklahoma, Tennessee, Texas and Virginia — account for more than 35 percent of the total rooftop solar photovoltaic (PV) technical potential in the contiguous United States, but only 6 percent of total installed distributed solar capacity, according to a March 2016 report released by National Renewable Energy Laboratory (NREL) and data provided by the U.S. Energy Information Agency. All of these states have significant barriers in place to distributed solar development and have earned an overall policy grade of “F” in our analysis. We based these grades on a thorough review of the presence, or absence, and strength of key distributed solar policies, and, combined with the overall rooftop solar photovoltaic technical potential rankings by National Renewable Energy Laboratory (NREL), identified the states that would benefit most from improvements to their distributed solar policy landscapes.

What are the main problems in Virginia? According to the report:

Why does Virginia have such godawful policy when it comes to spurring the growth of clean energy and transitioning as rapidly as possible off of dirty fossil fuels, which we MUST do on an urgent basis for pressing economic and environmental reasons? The report doesn’t address this specifically in Virginia, but the answers — to all of us who follow Virginia politics — are crystal clear: 1) a state government, along with regulatory agencies, that have been effectively “captured” by the very polluting industries they are supposed to be regulating; 2) a strong “Dillon Rule,” which prevents more environmentally-minded (and threatened) localities, like Arlington, Fairfax, Virginia Beach, etc., from enacting strong clean energy policies themselves; and 3) the uniquely powerful, and uniquely bad, Dominion Power, which has spent millions of dollars buying up our legislators, regulatory agencies, etc. in order to get their way every single time.

Change any (or preferably ALL) of those, and things would get better very quickly. Because the fact is, Virginia has enormous clean energy potential – energy efficiency, offshore wind, distributed and utility-scale solar – with the only major obstacles standing in the way of a clean energy boom being bad policies. The question is, how long are Virginia voters going to put up with this crap????

h/t to Ivy Main for alerting me to this report!