Over at the Huffington Post, Elliott Negin (Senior Writer, Union of Concerned Scientists) writes about “Coal Companies’ Secret Funding of Climate Science Denial Exposed.” Among those companies is one — Alpha Natural Resources — that’s headquartered right here in Virginia. I’d also note that Alpha has donated a s***-ton of money over the years to Virginia politicians — over $2.2 million to Republicans and over $600k to Democrats — attempting to buy up our political system. Meanwhile, as the HuffPo article explains, Alpha “has been especially active in supporting the [climate science] denier network,” including “financial ties with a half dozen denier organizations, some which have direct links to billionaire brothers Charles and David Koch,” as well as “the Heartland Institute, which is probably best known for its billboard likening climate scientists to the serial killer Ted Kaczynski; and theAmerican Legislative Exchange Council (ALEC), which convenes conferences for its state legislator members featuring speakers who distort climate science and disparage renewable energy.”

So yeah, Alpha is the worst of the worst. The question is, can they be prosecuted? As I wrote a few months ago:

Virginia has its own RICO statute on the books. This statute certainly should be looked at as a basis for state-level investigation and/or prosecution of fossil fuel companies based in, or with offices in, Virginia, who engaged in climate science denial.

Also note that Virginia AG Mark Herring stood with other states’ AGs, several of whom are looking at potential charges against fossil fuel companies for, among other things, whether they “properly disclosed financial risks related to climate change.” The potential consequences? “Some experts see the potential for a legal assault on fossil fuel companies similar to the lawsuits against tobacco companies in recent decades, which cost those companies tens of billions of dollars in penalties.” And if, as Mitt Romney argued, “corporations are PEOPLE,” then perhaps the AGs could go after fossil fuel executives as well? Anyway, it all needs to be looked into thoroughly by state Attorneys General, including Virginia’s, to determine what laws (if any) were broken and what penalties (if any) are applicable. Is there any good reason not to do this, and to do it ASAP, particularly given the raging climate crisis we now see unfolding? I can’t think of any. 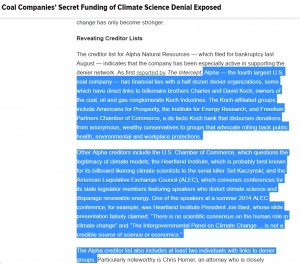 .@VASenateDems Lay Out Budget Priorities for August Special Session ("Coming out of the pandemic, we are well-positioned to rebuild stronger and better.") https://bluevirginia.us/2021/07/virginia-senate-democrats-lay-out-budget-priorities-for-august-special-session