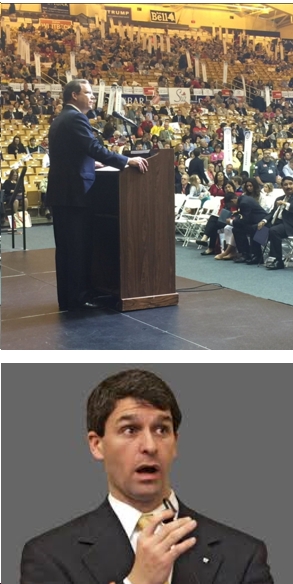 I’ve been listening on and off to the coverage by John Fredericks of the 2016 Republican Party of Virginia convention, a bit-time Trump supporter, and predictably he’s not thrilled with the Cruz folks’ behavior. As Fredericks just said a few minutes ago, “all hell breaking loose…Ken Cuccinelli running amok…knocked [Virginia Trump Chair] Corey Stewart off the ballot.”

Fredericks adds that the Cuccinelli/Cruz folks have engineered a “coup” over “two delegates,” and calls it “insane, but that’s how they roll.” Fredericks says that when Cooch tries to run for governor next year, a lot of Trump supporters like Fredericks are “going to have a long memory,” and that “any hope for party unity just went out the window.” More Fredericks: “After today, there’s no way I’m voting for Ken Cuccinelli for governor ever again — I’m done,” this is a “travesty.”

That’s just a small sampling of the discord and nastiness Virginia Republicans are exhibiting today. For more, here are some tweets by Democratic Party of Virginia Communications Director Emily Bolton — and others where noted). Enjoy! 🙂

“Solid point @CoreyStewartVA abt Cooch on @jfradioshow …This isn’t about Nov. for @KenCuccinelli – he’s pivoting to 2017 #RPV2016”

“Judging by #RPV2016 slate, @KenCuccinelli‘s influence is on full display. Consensus is that Cooch is considered “establishment”…,@KenCuccinelli stacked slate w. Cruz dels even tho Cruz can’t win nomination. Clearly this is about 2017 #RPV2016. Not good 4 @EdWGillespie”

UPDATE 2:15 PM: The hysteria and wild, over-the-top exaggeration by Virginia Republican Chair John “Anti Semitic Joke Dude” Whitbeck in his speech is beyond belief. In short, they really think that if Democrats win in 2016, they are doooooooooomed (“the Republic will fail,” blah blah blah). Yet we’d be fine with the utterly unqualified blowhard/neo-fascist Trump or extremist Ted Cruz? Utterly nutso.