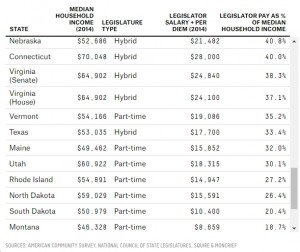 Over at FiveThirtyEight.com, they’ve got a fascinating article entitled, How Much Should State Legislators Get Paid? Here are a few highlights, with my comments about how Virginia’s General Assembly stacks up.

So, yeah, Virginia’s legislature should be professionalized – not to mention overhauled from top to bottom, from ethics to campaign finance to redistricting to everything mentioned above. But, of course, it won’t be. And on that cheery note…