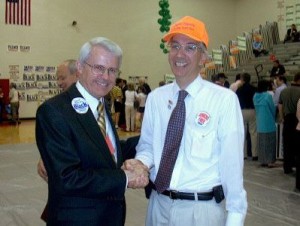 Check out these Loudoun County GOP straw poll results, conducted prior to the 10th CD Republican convention, as they are very telling…although certainly not in a good way. The following are some of the top straw poll finishers for national delegate, with a brief description of why I said “not in a good way.”

Dick Black (Cruz supporter) 45 votes, 16%:  See here for more on this lunatic. Also see: What Is It With Loudoun Republicans?!? Dick Black on Spousal Rape, “Nighties,” etc., The Truth About Dick Black (e.g., called birth control pills “baby pesticides,” passed out “pink plastic fetus dolls to state lawmakers in 2003 in a creepy campaign to win votes for various anti-abortion measures,” called “An Embarrassment to us all” by John Feegel, a former Chief of Staff to the Republican Leader in the Virginia House of Delegates); Republican Loudoun-sanity Continues: Dick Black Rails Against Gays in the Military (“there was a young fellow who went to the showers at night, there were two homosexuals lurking — they were also basic trainees – and they strangled him with a towel and forced him to submit to, you know, things that we won’t talk about”); Sen. Dick Black (R-Homophobia): Polygamy “just more natural” than homosexuality; VA Sen. Dick Black (R) Praises “Extraordinary Gallantry” of Syrian Armed Forces, GOP Candidate Who Made Marital Rape Remarks Drops Out of Congressional Race, etc, etc. A perfect fit for Ted Cruz! LOL

Patricia Phillips (Cruz) 32 votes, 12%: Check out this classic by Too Conservative, in which a robocall by her State Senate campaign called Mark Herring “a ‘traitor’ and more for voting WITH Governor McDonnell on transportation issues, then signs off with ‘Paid for and authorized by Patricia Phillips for Senate.’  Huh?  Vote for the Republican because the Democrat is too Republican?” Also, from that same post: “Then, in  a recent mailer, she calls out Herring for not thanking veterans –using a picture of a SOVIET officer.  Look closely and you’ll even see the “CCCP” in one of the medals on his chest.” I actually would have guessed that Phillips would be more of a Trump supporter, but crazy Cruz will do I suppose.

Howie Lind (Trump) 23 votes, 8%: See Howie Lind Has Gone Off the Deep End by Republican Brian Schoeneman. That kind of says it all, and also helps explain Lind’s support for Trump.

There are a lot more right wingnuts in the straw poll where these came from, but you get the idea. What I find interesting, and highly revealing, is that the same people who voted for the aforementioned also voted for…yep, Ed Gillespie for governor (note: Ken Cuccinelli was not on the ballot, for some strange reason) and Jill “Mandatory Transvaginal Ultrasounds” Vogel for Lt. Governor. What does that say about Gillespie and Vogel? For starters, that under no circumstances should Virginia Democrats allow them to get elected next year.

Wow, congrats to former VA House Dems Exec. Director @TMSoutherland85; sure he will do a great job in PA! https://bluevirginia.us/2021/04/tuesday-news-iea-issues-dire-warning-on-carbon-emissions-its-almost-like-insanity-gop-base-continues-to-lash-out-over-trumps-defeat-us-braces-for-chauvi#comment-5352291712