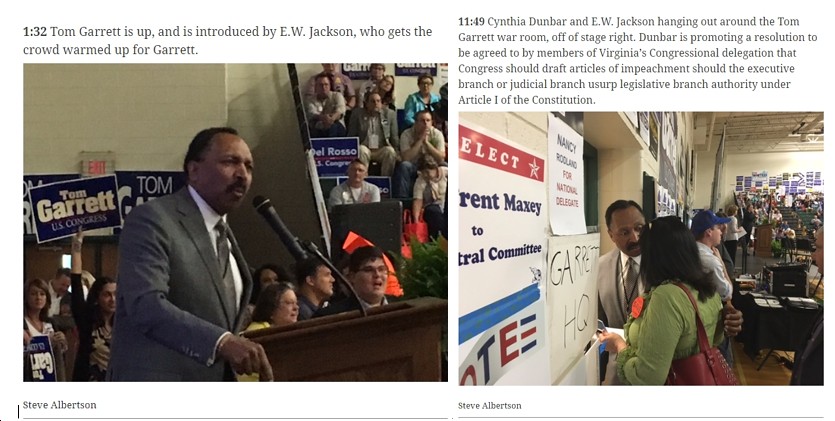 Great live blogging by The Bull Elephant’s Steve Albertson of the 5th CD GOP convention today. The big news: Virginia State Senator Tom Garrett (far-right “R”) won the nomination, although it took three ballots to do so. Now, Garrett will face the impressive Democratic nominee Jane Dittmar, who I interviewed a few weeks ago, in a district that was held until the 2010 Tea Party wipeout election by Democrat Tom Perriello. As I wrote in that piece, Democrats have a chance, albeit not an easy one, to take back this district.

Also see Sen. Tom Garrett’s legislation against fantasy sanctuary cities, Va. Sen. Garrett’s revision of anti-sodomy law advances; he says point is to protect minors, Senator Dick Black Strongly Endorses Tom Garrett for Congress (remember that Black’s the anti-LGBT and anti-abortion absolutist who just went to Syria to meet with and offer his support to that country’s war criminal President Bashar Asad); and Thomas Garrett, a legislator in Virginia, seems hell-bent on criminalizing oral sex between teenagers. That’s just a short list…it goes on and on. To put it mildly, Garrett is THE LAST thing we need in Congress.

Also note that at today’s 5th CD GOP convention, the person who introduced Garrett was none other than our old pal, theocratic extremist and bigot E.W. Jackson. At the convention, introducing his BFF Sen. Garrett, “Bishop” Jackson employed his usual subtlety, declaring, “Our enemies are not in this room, our enemies are in the White House.” Lovely, eh? More to the point is the fact that Jackson is a huge Garrett supporter; what else do you really need to know?

OK, fine, you want another data point on how “out there” Garrett is? Check out that photo of E.W. Jackson hanging out near the Garrett “war room” with Cynthia Dunbar. Who’s Cynthia Dunbar, you ask? As RTD columnist Jeff Schapiro writes, she is “a religious conservative who, as a member of the Texas Board of Education, was fiercely hostile to the state’s public schools.” Let’s get more specific, per Right Wing Watch (bolding added by me for emphasis):

Before joining Liberty University, the evangelical school founded by the late televangelist Jerry Falwell, Dunbar stoked national controversy when she tried to insert historical revisionist views into the Texas public school curriculum and textbooks. Since many textbooks are designed for the large Texas market, the changes, which would have placed a right-wing spin on American history and the U.S. Constitution, would have had an impact in other states as well.

Among other far-right views, Dunbar says she opposes the separation of church and state since she believes the founders wanted the government to promote religion. After leaving the school board, Dunbar admitted that she tried to shape the state’s curriculum in order to cure America of being a “biblically illiterate society” by teaching “the ‘laws of nature’s God’ revealed through the Holy Scripture.”

That came as no surprise, as Dunbar once led the board in praying for “a Christian land governed by Christian principles” and asserting that the Bill of Rights came straight out of the Bible. She similarly told a Washington, D.C., prayer rally that schools cannot instruct in an environment “devoid of the presence of the most high God,” praying for God to “invade our schools.” In a speech in favor of a sweeping anti-abortion bill, Dunbar asserted that lawmakers “don’t have the freedom to make any laws if they are contrary to what God has said in his Holy Scripture.”

Dunbar believes that the U.S. was designed to have “an emphatically Christian government” and must have a “biblical litmus test” for public officials, saying that they must have “sincere knowledge and appreciation for the Word of God in order to rightly govern.”

In sum, the fact that Jackson and Dunbar are two of Tom Garrett’s biggest supporters tells us a lot about the guy. The most important thing it tells us, of course, is that he should not – repeat, NOT! – be elected to Congress from the 5th CD. Fortunately, there’s a fine alternative — Democratic nominee Jane Dittmar, who should be supported by anyone not in sync with extremists Cynthia Dunbar and E.W. Jackson.