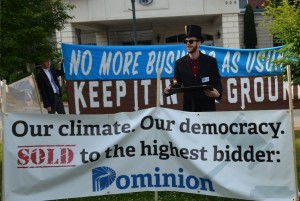 Activists from Md., Va., N.C. and S.C. unite to challenge business practices that jeopardize shareholders, communities, and the climate

Columbia, S.C. — Activists from across the Southeast converged outside Dominion Resources’ annual shareholder meeting in Columbia this morning, urging the company to abandon its drive for decades of more dirty energy investments and instead lead the region’s transition to renewable energy.

Under banners reading “Our Climate, Our Democracy. SOLD to the highest bidder: Dominion,” and “No more business as usual. Keep it in the ground,” roughly 20 protesters greeted the arriving utility executives, board members and shareholders by staging a mock auction of citizens’ clean air, clean water, climate and democracy. “Dominion officials” repeatedly outbid “the people,” using their deep pockets to buy off elected leaders and block meaningful clean energy solutions.

Inside the meeting, activist shareholders presented five separate environmental resolutions aimed at forcing the company to clean up its act.

“Dominion is putting short-sighted profits ahead of our right to clean air and water, a stable climate, and a functioning democracy,” said Dyanna Jaye with the Chesapeake Climate Action Network, and one of the protest organizers. “As Dominion pours cash into our political system, it gets a license to keep pouring toxins into our waters and pumping heat-trapping pollution into our atmosphere.”

Dominion is a primary force behind a massive overbuild of new infrastructure for fracked gas across the region — including its controversial proposed 600-mile Atlantic Coast Pipeline — and a major campaign contributor to state politicians in Virginia, where the company is headquartered. A reportreleased last month shows that Dominion’s $5.1 billion pipeline is part of a significant overbuild by the gas industry that puts landowners, ratepayers and investors at risk.

Protesters traveled from as far as Lusby, Maryland, where Dominion is constructing its Cove Point gas export facility, to highlight the harm these investments have on local communities.

“I live in one of the 2,365 houses within a two-mile evacuation radius around Dominion’s Cove Point facility,” said Ana Ojeda of Lusby, who is a member of We Are Cove Point and Calvert Citizens for a Healthy Community. “I’m lucky enough to be able to take a day off and drive all the way down to Columbia. I’m here to express how anguished and heart-broken our community is at having to host this toxic facility. We’re going to suffer so Dominion can profit.”

Lusby residents were joined by activists from Virginia, where Dominion is facing public backlash and a lawsuit for polluting the state’s rivers and drinking water with toxic coal ash. In February, more than 600 people marched through the streets of downtown Richmond to protest state permits allowing Dominion to dump half a billion gallons of coal ash wastewater into the James River and a tributary of the Potomac River. Two weeks later, more than 30 students staged a sit-in at the Virginia Department of Environmental Quality amidst revelations that Virginia’s top regulator, David Paylor, took a 2013 golf vacation on Dominion’s dime.

“Dominion’s plans to invest billions in fracked-gas power plants and pipelines will shackle its customers and its shareholders to the health and financial risks of dirty energy for generations to come,” said Hannah Wiegard, Virginia Campaign Coordinator at Appalachian Voices. “With the solar industry booming, energy efficiency immediately at hand, and the costs of climate change rising, clean energy is the safest and savviest investment today.”

Activists from Columbia and nearby North Carolina joined today’s action in solidarity against Dominion’s multi-billion-dollar pipeline plan that would trample property rights and worsen climate change.

“South Carolina legislators listened to their constituents and spoke out against the Palmetto Pipeline that threatened local property rights and our environment,” said Drew Hudson, a Columbia resident (Earlwood) and director of Environmental Action. “But Dominion is seizing land and paving pipelines across hundreds of families in North Carolina, Virginia, Georgia and beyond. What’s fair here should be fair everywhere — no more seizing private property for corporate profit and at the expense of our water, air and climate.”

Shareholders presented resolutions inside the meeting pushing Dominion to acknowledge the financial risks climate change would pose to its bottom line, to include an environmental expert on the company’s board, to make public its rationale for funding the American Legislative Exchange Council (ALEC) — a group known for its aggressive support of climate change denial and attacks on clean energy — and more.

Ruth Amundsen, a shareholder who traveled from Norfolk, Virginia, said: “This is really a pivotal time. So many utilities are learning that a new business model is needed. They need to fully commit to renewable energy, and learn to profit from a distributed generation network. If Dominion can be flexible enough to do that, they can remain a thriving business into the future, and help not only local economies and job markets, but make our energy network more resilient and less polluting to boot. Remaining tied to fossil fuels because that is the way they have always worked — that model is not going to be successful in the future. To quote Arnold Schwarzenegger: It’s like being the last horse-and-buggy salesman in the age of cars, or the last investor in Blockbuster in the dawn of Netflix.”

The five accountability resolutions are Items 4,5,7,8 and 9 in the 2016 proxy statement: https://www.dom.com/library/domcom/pdfs/investors/proxy-2016.pdf?la=en

Revisiting My 2003 Piece, “Is America Drifting Towards Fascism?” (Unfortunately, it all seems more true today than 17 years ago.) https://bluevirginia.us/2020/06/revisiting-my-2003-piece-is-america-drifting-towards-fascism via @bluevirginia