The following is from Frank Kilgore, an attorney in Southwest Virginia who represents Mountain Heritage, Inc, a non-profit conservation group based in the Clinch River Valley, the most biologically diverse native ecosystem in the Northern Hemisphere (and they want to keep it that way). Among other things, according to Frank Kilgore, Mountain Heritage, Inc. provides place-based watershed books to students, cleans up dump sites, builds trails, replaces raw sewage pipes with septic systems and implements litter control programs that have spread statewide.

The following email from Frank Kilgore summarizes the problem, in his view (bolding added by me for emphasis).

For more than two decades I have been trying to get Virginia governors and their secretaries of natural resources and forestry to push for the adoption of mandatory best management practices regarding logging, particularly in steep terrain.

Currently Virginia has one of the nation’s weakest laws and regulations regarding logging operations regardless of their size. Before cutting trees, building roads and disturbing acres and acres of surface loggers in Va are NOT required to:

The only truly mandatory measure is to keep equipment out of streams per the state water control act.

I have a series of letters between myself and Virginia Secretary of Agriculture and Forestry Todd Haymore. You will be stunned how blatantly he protects the logging industry against an impartial study, “unnecessary” regulations and any attempt to bring the largest unregulated extractive industry in the state into the 21st century.

I copied the governor, Lt governor (whom I respect a great deal) and the AG. But nothing fazes Haymore, particularly facts and the laws of physics.

This is one area where a lot of good could be accomplished on an issue that really is not debatable. A lot can be done administratively if the Governor has the will to do it. Right now he is being fed a truck load of baloney by a secretary who has pledged his soul to the company store.

Now, here’s the section of the letter Frank Kilgore is referring to. Note that Haymore does indeed refer to “protecting Water Quality without additional and unnecessary regulations.” Except for the fact that, as Frank Kilgore explains, regulations are very much “necessary,” given the problems he describes (see below). 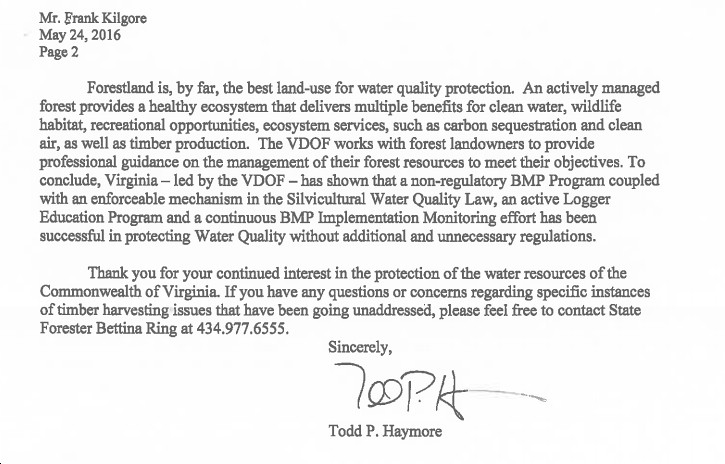 What are the problems with lightly-regulated logging in southwestern Virginia? According to Frank Kilgore, they include: “massive erosion in the mountains;” “cull and damaged trees and bare ground that many times sprouts with non-native invasive species,” which choke out “native trees and plant life;”and damage to one of “the most biologically diverse native ecosystem[s] in the Northern Hemisphere,” a treasure that “needs protecting” – not trashing.

Finally, here’s Frank Kilgore’s last letter to Todd Haymore, who reportedly is moving upwards and onwards to become Virginia Secretary of Commerce and Trade. Yet as Frank Kilgore acidly notes, in his most recent job, Haymore acted as a “de facto industry lobbyist” who “did not protect our state’s watersheds and streams.” Finally, Kilgore concludes by wishing Haymore well in his new job, noting (snarkily) that as Commerce Secretary, Haymore at least won’t have to deal with “gravity, rain, erosion, physics and pesky watershed advocates.” For my part, I’m thankful we have “pesky watershed advocates” like Frank Kilgore, especially if the government that’s supposed to represent the people and protect our environment is more focused on promoting corporate interests. 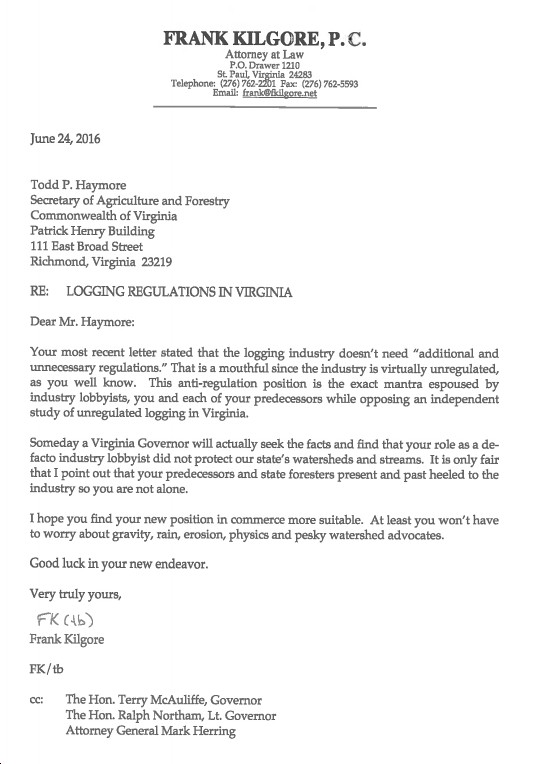