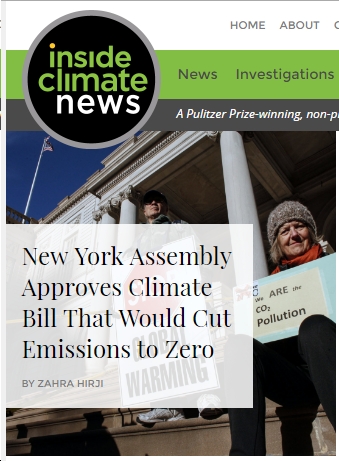 Just imagine a state legislature not dominated by Dominion Power and other slimy, politically powerful fossil fuel interests. How about one with some serious ethics laws about being bought and paid for by corporations? How about one in which progressives, environmentalists and/or Democrats held the majority? If so, we could get all kinds of great legislation that would move Virginia forward in a big way. For instance, how about this example from New York State (bolding added by me for emphasis)?

The New York State Assembly approved the nation’s most ambitious climate change bill Wednesday. The vote came hours after a broad coalition of environmental justice, climate activist, conservation and labor groups took to the State Capitol in Albany urging lawmakers to swiftly pass the bill before the legislative session ends on June 16.

The legislation requires the state to reduce greenhouse gas emissions from major sources to zero by 2050. That would demand a near total decarbonization of its economy, and it would put New York among the world’s leaders on forceful climate action. To achieve it, the bill gives the state until 2030 to get at least 50 percent of its electricity from clean energy.

By next year New York would have to generate 27 percent from renewable sources. In February, New York got about 28 percent of its electricity from renewables, mainly from hydroelectric power, according to the U.S. Energy Information Administration.

The legislation, called the New York State Climate and Community Protection Act, is also notable for its emphasis on environmental and economic justice, according to the bill’s advocates. It aims to “prioritize the safety and health of disadvantaged communities” and “it creates good jobs and protects workers and communities,” a memo by lawmakers said.

Great stuff, huh? Would be amazing if we could have that here too. Instead, what we’ve been getting in Virginia with a Republican-controlled, fossil-fuel-dominated General Assembly is environment-killing, job-destroying, godawful legislation that keeps entrenched dirty energy companies and fossil-fuel-dominated utilities like Dominion Power in charge. It’s a huge mistake, and sadly I haven’t seen leadership to change this from our top “leaders,” even Democratic ones.

Why not? I’d argue that it all flows from our corrupt system, in which incumbents protect themselves from voters, in which corporations and wealthy individuals can give unlimited $$$ to “capture” our government, and even where vested interests get to write their own legislation! until all that starts to change in a big way, I doubt we’ll get anything like what New York just passed, here in Virginia. And that’s a huge loss for our state, even if Dominion et al think it’s hunky dory.

Which makes it crucial that Virginia elect *Democrats* on 11/2 https://bluevirginia.us/2021/09/monday-news-un-to-world-leaders-to-curtail-warming-you-must-do-more-pfizer-says-covid-vaccine-safe-and-effective-in-children-ages-5-to-11-democrats-confront-rubiks-cube-on-steroids#comment-5541984636

Stafford Dems-endorsed candidates - if you live in Stafford County, make sure you vote for them! https://bluevirginia.us/2021/09/monday-news-un-to-world-leaders-to-curtail-warming-you-must-do-more-pfizer-says-covid-vaccine-safe-and-effective-in-children-ages-5-to-11-democrats-confront-rubiks-cube-on-steroids#comment-5541974307