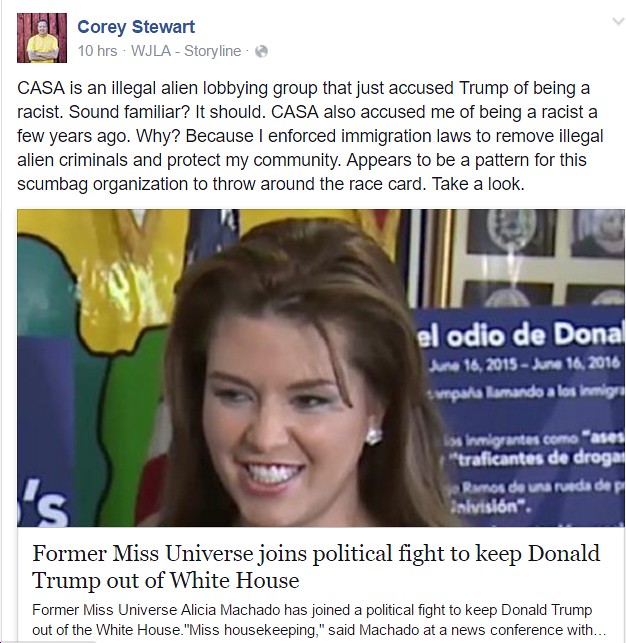 In fact, CASA is is an immigrant advocacy group whose mission is to “create a more just society by building power and improving the quality of life in low-income immigrant communities…living free from discrimination and fear, working together with mutual respect to achieve full human rights for all.” Horrible, eh?

In stark contrast, Donald Trump’s Virginia Chair, Prince William County Board Chair Corey Stewart, has been on a mission since 2007 to vilify, demonize and harass the human beings he disgustingly refers to as “illegals” (see 9500 Liberty for full documentation of Stewart’s actions at that time). Just like the guy Stewart’s now trying to elect to the most powerful position on earth…ugh.

UPDATE 8:37 am Friday: Prince William County Democratic Committee Chair Harry Wiggins says: “Stewart is an unprincipled Trump whore.  His constituency is those who fill the sewer with hate.  He has repeatedly and unsuccessfully tried to drive minorities including the Latino community and Muslim community out of majority minority’s Prince William County.  Stewart is the epitome of the Republican Party standing for hate and evil.”

Corey Stewart once again demonstrates that he lacks the integrity worthy of a County Board Chair. His Facebook attack against CASA exemplifies his disdain for our immigrant community and mirrors a presidential candidate who tweets. These are not the values of Virginia and not the values of the United States. In this the month of immigrant heritage, we need politicians who will unite not divide.

“Corey Stewart’s self-proclaimed ‘aggressive’ views on immigration are not based in fact, but in bigotry. His constant proposals to kick out undocumented individuals will break up families and destroy portions of Virginia’s economy. His threatening tone shows total lack of empathy for these hardworking members of our community and for the organizations serving and supporting them to achieve the American Dream.
The Democratic Latino Organization of Virginia and its members will not be intimidated by these types of attacks. Our efforts in the coming months will on community engagement, voter registration, and civic education. We will continue to fight for the rights of Hispanics and Latinos throughout the Commonwealth.”
Leni Gonzalez
Founding Member
Democratic Latino Organization of Virginia
UPDATE 11:33 am: Del. Alfonso Lopez says, “What I’ve said about Republican Presidential Nominee Donald Trump also applies to his Virginia State Chair Corey Stewart. A political career built on boorish behavior, xenophobia, and division is not worthy of Virginia. His ugly past statements about New Americans, Latinos, and now CASA are wrongheaded and go against who we are as an inclusive society. The refusal by Republican elected officials in Virginia to condemn the statements made by Trump and Stewart sends a horrible message. Their silence is deafening.”