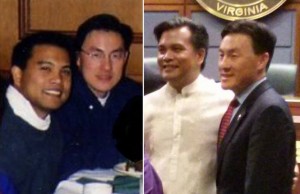 Del. Mark Keam (D-Vienna/Oakton) posted the following on his Facebook page, and I thought it was well worth re-posting here.  Also, if you want to make a contribution to Joe Montano’s memorial fund, please click here. Thanks.

Last Sunday at about this time, I arrived in Philadelphia to attend the Democratic National Convention. I was excited to be part of an historic occasion when we would nominate the first woman to be a national party’s presidential nominee.

As a Virginian, I was just as excited about the potential of having a vice president from our state for the first time in nearly two centuries. As one of Tim Kaine’s many many friends, I was eager to celebrate this moment in Philadelphia with my fellow “Kainiacs.”

I was particularly looking forward to seeing one friend who was not only a long-time Tim Kaine supporter, but a staff in his Senate office. When I didn’t see him on Sunday, though, I assumed we’d run into each other soon enough.

Shockingly, I soon learned that he would not be coming to Philadelphia at all. Joe Montano left us way too soon, at the age of 47.

Joe was one of my closest friends and fellow foot soldiers on the battlefield of civil rights and progressive politics.

Joe and I met 20 years ago when we were young, single, energetic, and hungry to make a difference for our communities. He was a Filipino American grassroots advocate in our nation’s capital, and I was his Korean American counterpart.

We became fast friends when we kept running into each other at meetings to organize various community and political projects. Over the years, we worked together on countless nonprofit causes and political campaigns, and our friendship turned into a solid and trusted working partnership.

I could always open up to Joe about anything that was on my mind, and he would always provide me with candid and insightful reactions.

In late 2008, when I launched my first campaign for public office, Joe became one of my earliest advisers. I will never forget the sparkle in his eyes, the grin on his face, and the enthusiastic and positive reaction he had when I told him I was going to run for the Virginia state legislature.

He came over to my house, sat in our kitchen, and we hashed out my campaign strategy over several drinks. Although Joe and I had already worked together on several campaigns in Virginia, I never appreciated his political and interpersonal skills as much as when he volunteered on my campaign.

Joe introduced me to key players in Virginia politics that I didn’t already know, and he vouched for me with seasoned grassroots activists with whom he worked on previous campaigns. As a result, I was able to win my first campaign against the odds, and Joe was able to help elect another Democrat in Virginia.

Throughout this past week in Philadelphia, I was saddened to think that Joe will not be on the campaign trail again.

Just a couple of days before Senator Kaine was tapped to be Hillary Clinton’s running mate, I was with Joe and his boss in Fairfax County. Even though we were only speculating then, we were excited for the potential, and I was so happy for Joe’s future.

During the convention, Senator Kaine visited the Virginia delegation and talked about how he spent the day before he received Hillary Clinton’s call with Joe, attending community meetings in Northern Virginia and discussing important issues that Joe wanted the Senator to push for, such as immigration reform and fighting prejudices against Muslims and others.

As you can see in this video of that powerful speech (https://www.youtube.com/watch?v=jULMeEgfews), Senator Kaine said the last thing Joe did for him was reaching out and building bridges with people. And that’s what this election is all about.

Hillary Clinton and Tim Kaine will continue to fight for these and other progressive goals, and Tim wants to win this election because the work that Joe did to bring people together must continue.

As devastated as I am over losing a close friend, I also feel energized by the Joe Montano Spirit just as Senator Kaine is motivated. I will work twice as hard to make up the time and work that Joe will be unable to do on this campaign.

I want to win this one for Joe Montano.

If you want to help maintain Joe’s legacy, you can volunteer for a political campaign or a progressive cause in your community. You can also make a financial contribution to this Memorial Fund:

And like this page to keep up with the memorial service and other events honoring his life: https://www.facebook.com/Live-Like-Joe-1025500774194249/

Rest in peace, my friend, until I see you again. And your spirit will live on with me until my last campaign.