Tim Kaine and I have certainly had our differences on policy issues over the years, but I can say sincerely that he’s a great guy, a good and honest man, and strong on most of the issues progressives care about. I’ve also got to say that I’ve been very happy with his work and with his voting record in the U.S. Senate, including his support for clean energy and climate action. Finally, on a personal note, it’s pretty cool that the guy I worked hard to elect governor in 2005 with the whole “Raising Kaine” effort, then worked closely with his campaign in 2012 to help elect him to the U.S. Senate, is now one step away from becoming Vice President of the United States. Go Clinton/Kaine! 🙂 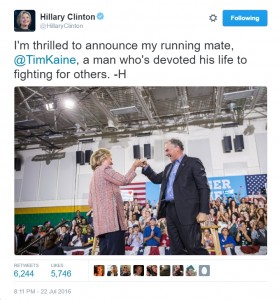