Here’s the second post by Coy Barefoot on UVA’s supposed “slush fund,” again cross posted with permission from his Facebook page. This one has also stirred up a lively discussion, with two elected officials – of wildly different political ideologies – weighing in. I’ll put their comments below the screen shot. Also note that my views are very close to Coy Barefoot’s on this subject, including this comment by Coy:

…this is a conversation that we should be having, but at the same time I don’t see anything nefarious going on. the aggregated strategic fund that was created WAS in fact created in part to help students with tuition (in addition to funding numerous other goals in the strategic plan- a plan that Helen Dragas herself demanded the University come up with. well, now that they have, they’re trying to figure out how to fund it). and as far as UVA “trying to keep the discussion away” – haha, would that UVA was THAT good at controlling any conversation! 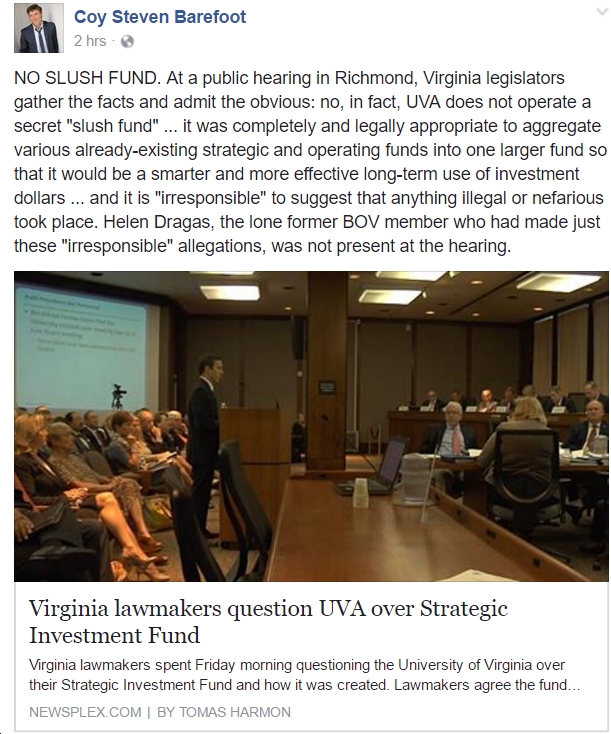 Far-right-wing “R” State Sen. Steve Martin: “I’m having a hard to time understanding how the returns on $2.3 billion couldn’t have reduced the average rate of tuition increases, and how a fund that can be used for specific purposes to be determined later wouldn’t be called a slush fund. Those were the issues raised, and the University’s own definition of the fund is fairly determinative in itself. Let’s say it was a mediocre/okay year for the investment, and the fund only generated $100,000,000 (aka $100million). How much of an impact could that have had on the offset of one year’s tuition increase? I’m puzzled at the response and conclusions.”

Progressive “D” State Sen. Scott Surovell: “Coy – Everyone misses the point. The legislators are talk to are most upset not about HOW the $2.3B was accumulated or the legality of it, but (a) why did UVA accumulate $2.3B in profits while jacking up tuition 75% and (b) why is UVA admitting a minimal number of in-state students. To us, it appears that they believe the school is looking out for itself and it’s rankings instead of Virginians. THAT is the issue and UVA is trying to keep the discussion away from those issues and focused on stuff they can defend…The nefarious part is that UVA has been misleading the legislature for years about the reasons for their actions – e.g. they need more money. People are not happy…This issue isn’t going away. UVA has lots of questions to answer for past behavior, statements, and excuses. Legislators are furious…I agree 100% about the legislature’s lack of commitment. I lived through the first big round of budget cuts at JMU between 1990 and 1993. They are a big reason why I got more interested in state policy.”