Gov. McAuliffe speaking a few minutes ago (see above for video; photo by Del. Jennifer Boysko):

We are here today to talk about an issue of basic justice: the restoration of civil rights….I personally believe in the power of second chances and in the dignity and word of every single human being. This nation began with Thomas Jefferson’s powerful words that all men are created equally…I feel…a duty to all the men and women who are seeking to have their civil rights restored…and I am not content to condemn them for eternity as inferior, second-class citizens… 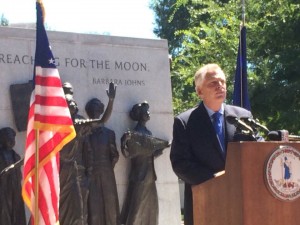 …The system itself was and is deficient and unfair…cannot be fixed with a few minor tweaks…Republican leaders sued to revoke the rights of those 200,000 men and women, to suppress their voices in our democracy. The Virginia constitution is clear – I have the authority to restore civil rights without limitation. But the court dismissed the clear text of the constitution by simply saying that the rights had never before been restored in this manner here in Virginia. In other words, we were messing around with the way things have always been done in the Old Dominion. But if Virginia did things the way they’d always been done, this is not a place that any of us would want to call him. If Virginia did what we’ve always done, our children would still attend segregated schools…Our buses would [still] have seats assigned by race. Interracial marriage would be illegal. Same-sex partners would not be allowed to marry. And Virginians would be forced to pay a tax at the poll on election day.

But we’re not going to waste any more time arguing about the old Virginia way – we’ve got a new Virginia way to pave and a new Virginia economy to build…We will proceed with the restoration of civil rights in conformity with the court ruling…but we will proceed…We are using criteria that are objective, uniform and fair…I’m proud to announce that last week, I approved the restoration of rights of nearly 13,000 of these men and women [who registered to vote since April 22]…

Personalized restoration orders will be printed with my signature and the state seal and mailed to those individuals [whose rights are being restored]. And we will include a voter restoration application in each mailing…In the interest of transparency, on the 15th of each month, we will release the names of the individuals whose rights we’ve restored…on a case-by-case basis [as set forth by the Virginia Supreme Court]…Extending voting rights to individuals who are living, working and paying taxes in our community is not a partisan act…

…the individuals who are complaining that these actions are partisan in nature are in many cases the same people who have used partisan majorities in the General Assembly to thwart progress on voting rights for decades. It remains my hope that the Republicans in the General Assembly will act as soon as possible to pass an amendment fully and completely washing our Commonwealth’s history of disenfranchisement…our work has not lost its urgency or moral imperative…We will continue to fight to ensure that our fellow citizens are not marginalized forever…I never said that our mission would be easy or would be short…We all know that the hardest tasks in life are the ones most worth doing…Today, we continue to move Virginia forward…towards an inspiring future that holds opportunity for all of her citizens.