Back in 2012, Virginia’s 10th CD was a prime battleground region in the presidential race between President Obama and Republican nominee Mitt Romney. The final results were 50.6% for Romney, 49.4% for Obama – super close. Since then, if anything, the 10th CD has been trending more diverse and more Democratic. So this year’s presidential election already was likely to be a nail biter yet again in the 10th CD. Then Trump – and his big, stupid, crazy, ignorant, paranoid mouth – came along, and the polling is really REALLY not looking good for Republicans right now in the 10th CD.

For instance, this morning’s WaPo poll breaks out results by region, including “D.C. suburbs” and “Northern Virginia exurbs.” As you can see from the following graphic of the 2012 presidential vote, the 10th CD is made up of those two categories, with Fairfax County (29.3% of the 10th CD vote in 2012) defined by the WaPo to be in the “D.C. suburbs,” and the other areas (e.g., Loudoun County, with 42.7% of the 2012 vote) apparently all defined by the WaPo as part of the “Northern Virginia exurbs.” 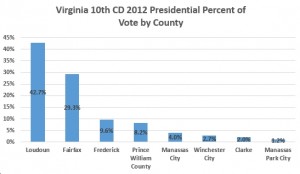 So what does it mean for Rep. Barbara Comstock (R) if Clinton-Kaine crush (e.g., by 30-40 points) Trump-Pence in the parts of Fairfax County located in the 10th CD, and also win the “Northern Virginia exurbs” portion of the 10th CD (the remaining 71% or so) by 7 points, as the WaPo poll indicates? I plugged in some numbers, based on the polling, and the bottom line – looking at it fairly conservatively – is that if the WaPo’s numbers are at all accurate, then the 10th CD could go for Clinton-Kaine over Trump-Pence by 20,000-25,000 votes, in contrast to the 4,000-vote margin Romney won the 10th CD by in 2012.

The question for Comstock then will become, how many of those extra Democratic presidential voters will split their vote “downballot” and choose Republican Comstock over Democrat LuAnn Bennett? So far, Comstock’s strategy to encourage just this type of voting pattern has been to avoid talking about Trump at all, even though he’s the presidential nominee of her party! Thus, when Trump says outrageous – unconstitutional, illegal, unAmerica, bigoted, ignorant, conspiratorial, etc. – almost every time he opens his mouth, Comstock’s response is to keep her own mouth sealed shut. Might as well just start calling her “No Comment Comstock.”

Can this strategy work? Yes, but not if 10th CD voters realize that if Trump ever were elected president (god forbid), someone like Comstock would certainly not show any courage or backbone against Trump’s extreme excesses. How do I know that Comstock wouldn’t push back against a President Trump? Very simple: look at Comstock’s craven behavior since Trump became the presumptive Republican Party presidential nominee this year. Is there any reason to think Comstock would act any differently if Trump actually became PRESIDENT? That’s really, really hard to believe…almost as hard to believe as Trump’s daily parade of lies.

More evidence: consider the long line of far-right loons and Trump allies (e.g., Sean Hannity, Newt Gingrich) who are also big Barbara Comstock fans. Again, is there any reason to think that Comstock would be supported by the same people who rabidly support Trump, yet somehow she’s more “moderate” or whatever? Nope, don’t think so.

All of which means that on November 8th, the choice for Virginia 10th CD voters – at least the ones not solidly in the Trump camp – should be an easy one when it comes to Congress. Either vote for an enabler and/or ally of Trump and his extreme supporters/endorsers, or vote for someone (Democrat LuAnn Bennett) who will both do a great job and also help Clinton-Kaine actually get stuff done in 2017 and beyond.  Again, this should not be a hard choice. We’ll see what happens in a bit over 83 days, but if I were Barbara Comstock right now, I’d be sweating bullets.

UPDATE: I just saw this article, which argues, “It is VERY hard for a House candidate — whether incumbent or challenger — to run significantly ahead or behind the top of the ticket in a presidential year…the best an endangered incumbent can hope for is to run five points ahead of Trump.” If that’s true, Virginia’s 10th CD will definitely be a race to watch this fall and on election night!