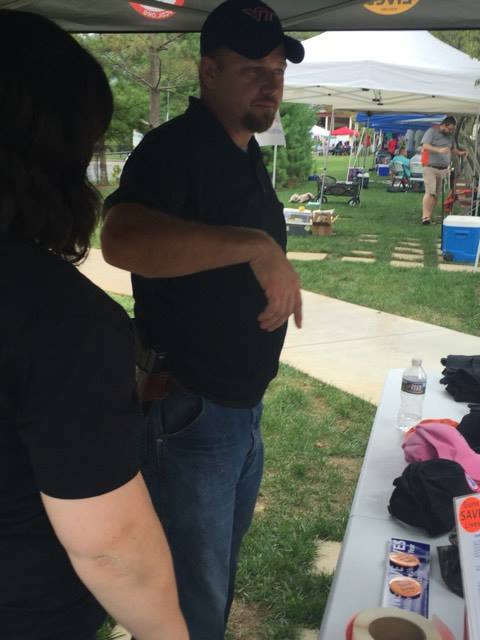 On Saturday, September 10th, I attended the annual “Pride in the Park” event organized by Roanoke Pride at Elmwood Park in downtown Roanoke. Roanoke Pride is a 501(c)(3) organization whose mission is to “promote acceptance, visibility, and a sense of community for Southwestern Virginia Lesbian, Gay, Bisexual, Transgender and other gender and sexual minorities by organizing events and providing opportunities for celebration, education, and outreach.” This year’s event had special significance, obviously, because of the gruesome tragedy that took place at The Pulse nightclub in Orlando, Florida on June 12th. A hate-filled gunman targeted members of the LGBTQ community at The Pulse, killing 49 people and wounding another 53. It was the worst mass shooting in U.S. history. 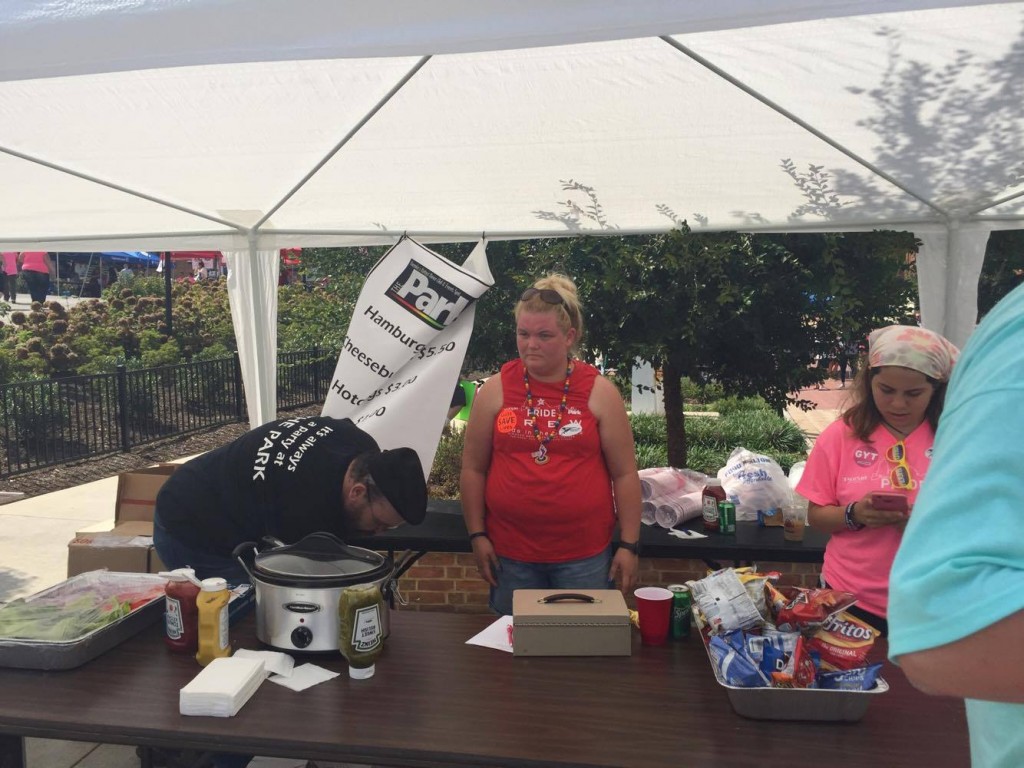 I was therefore horrified to see firearms being glorified—and even openly displayed—at Pride in the Park, from the moment I arrived at the event.

Coming into the park from Franklin Road, one of the first exhibitor booths I saw was that of the Virginia Citizens Defense League (VCDL), a radical pro-gun group that opposes all gun laws, including even the weak federal and state laws we currently have on the books. Several individuals manning the VCDL booth were openly carrying loaded handguns and wearing “GUNS SAVE LIVES” stickers.

The leader of VCDL, Philip Van Cleave, was famously interviewed on The Daily Show three years ago, and responded “whoop-dee-doo” to John Oliver when informed that Australia had eliminated mass shootings altogether by toughening their gun laws after the 1996 massacre at Port Arthur. Phil was not at the VCDL booth when I passed by, He was spending the day at a festival in Lynchburg featuring overtly homophobic vice-presidential candidate Mike Pence. Notable as well was the fact that VCDL page did not mention their Roanoke Pride booth at all on their social media feeds. 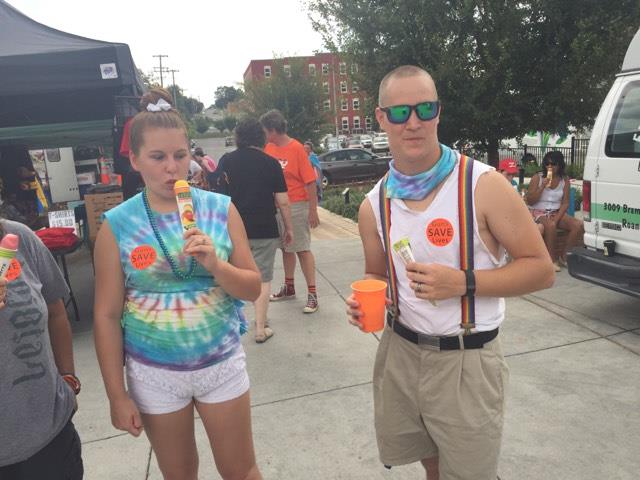 While VCDL was given a choice location at the event, groups that promote peace and gun violence prevention—like the Plowshares Peace and Justice Center, which distributed Gays Against Guns information and rainbow-colored “Guns Kill” stickers—were completely hidden in the second row of booths.

By this point, I was already upset, but then I noticed that three volunteers with Roanoke Pride were wearing the VCDL’s “GUN SAVE LIVES” stickers. I approached these individuals and asked them why they would possibly be wearing these stickers after the Orlando tragedy.  Their response, essentially, was to blame the victims at The Pulse; suggesting that if they had been carrying loaded firearms like their killer, they would not have died that evening. They made no mention whatsoever of the lax gun laws that allowed the Orlando gunman—a wife-beating terror suspect—to legally buy an assault rifle, handguns, and as much ammunition as he wanted. 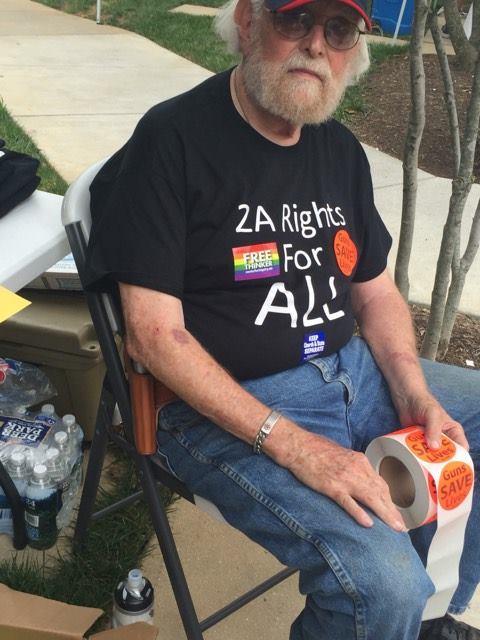 I had enough at that point and made my views known on social media to Roanoke Pride leader Jason Michael Gilmore (president), who alerted Timothy Dean (vice president of development) and Ryan Lineberry (CFO for Pride Entities). To his credit, Gilmore admitted it was inappropriate for his volunteers to be wearing the “GUNS SAVES LIVES” stickers and he ordered them to remove the stickers. They did. But Lineberry claimed that Roanoke Pride was somehow legally obligated to give VCDL a choice booth at his event because they had paid for it. I doubt that seriously, as he also claimed Roanoke Pride would be obligated to give an LGBTQ hate group a booth. However, he did tell me that he would try to find a better location for the Plowshares Peace and Justice Center in the future. Ryan also promised to open a dialogue with the Roanoke gun violence prevention community. I sincerely hope that some positive change can come from that dialogue. 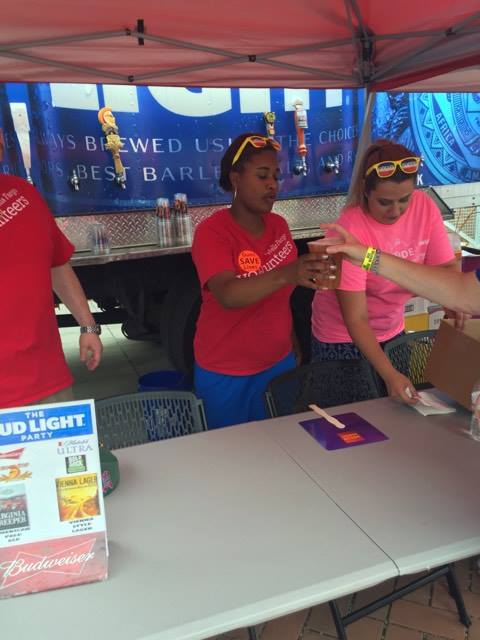 The VCDL would love to be able to rainbow-wash their radical, anti-government agenda and for the right price, Roanoke Pride seemed happy to provide that service. That is deeply disturbing, because anyone who understands contemporary American gun culture knows that it’s a breeding ground for toxic masculinity and hate. Let’s not forget that it was toxic masculinity that propelled the Orlando gunman to commit his unspeakable last act. And toothless gun laws—which VCDL has been lobbying for in Richmond for years—ensured that he was armed to the teeth and able to inflict mass carnage.

Unfortunately, I believe that if I, a cis straight woman, had not spoken publicly and loudly, Roanoke Pride volunteers would have kept their, “Guns Save Lives” stickers on all weekend. Following not only Orlando, but also the Backstreet Cafe shooting in Roanoke, this is something I simply can’t fathom. 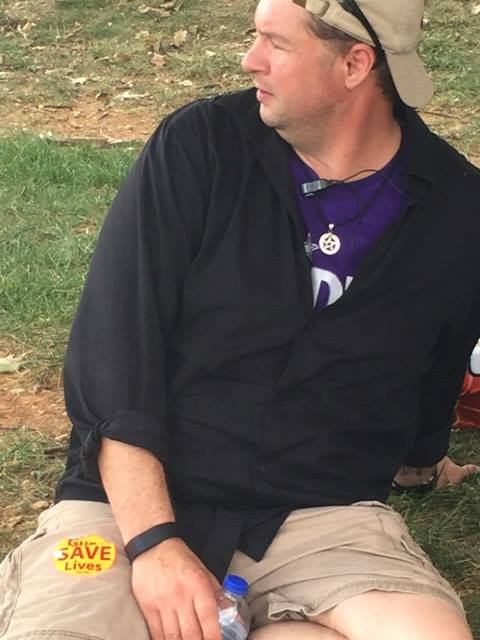 If you are as disturbed by the actions of Roanoke Pride as I am, make your views known to them. You can reach them through the following channels:

One of far-right VA Sen. Amanda Chase's GOP primary opponents, who's also very right wing, hits her for opposing Youngkin's elections commissioner Susan Beals; pledges loyalty to Youngkin. Not sure why Sturtevant says "a senator" instead of naming Chase. https://bluevirginia.us/2023/02/wednesday-news-hope-fading-as-deaths-in-turkey-syria-quake-pass-11000-dark-brandon-descends-on-bidens-state-of-the-union-address-melts-how-the-house-gop-blew-up-at-sotu-mitt-rom#comment-6110484047

"Republicans Left Bills Without Hearings Because They Don’t Want Constituents To Know Where They Stand " - @ProgressVA https://bluevirginia.us/2023/02/wednesday-news-hope-fading-as-deaths-in-turkey-syria-quake-pass-11000-dark-brandon-descends-on-bidens-state-of-the-union-address-melts-how-the-house-gop-blew-up-at-sotu-mitt-rom#comment-6110462007