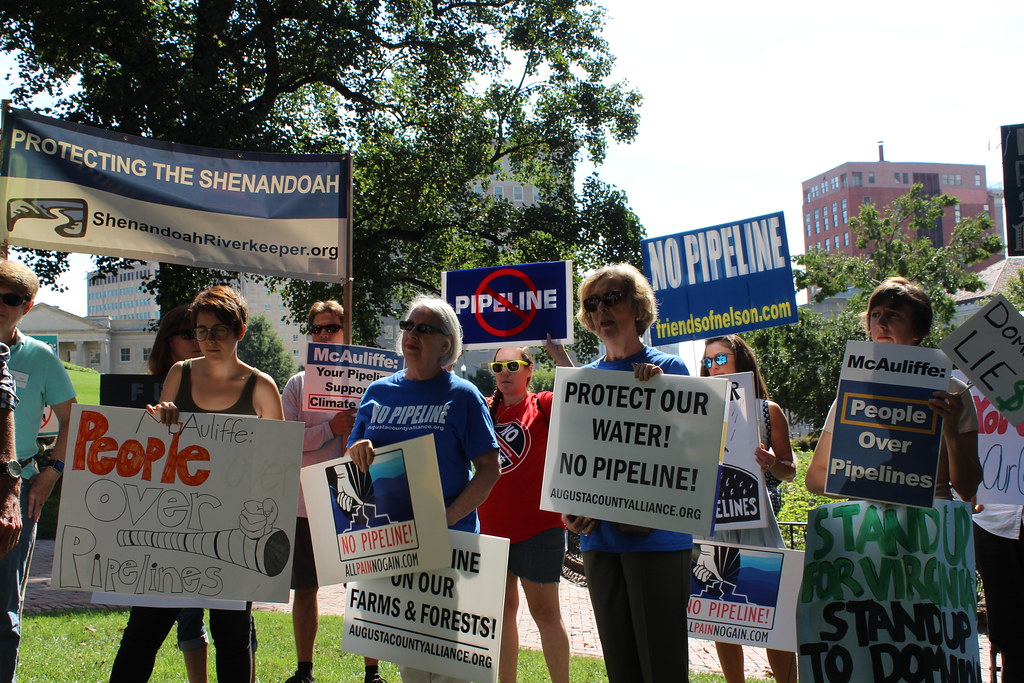 Nice job by the Chesapeake Climate Action Network (CCAN) and everyone else involved in these protests:

The first day of picketing kicked off this morning with a press conference on the Capitol Grounds, and united Virginians from Giles County to Buckingham County to Nelson County who are being directly affected by the proposed Mountain Valley Pipeline and Atlantic Coast Pipeline.

In recent interviews, Governor McAuliffe has repeatedly called the pipelines a “federal issue” and inaccurately dismissed the state’s direct authority to approve or deny the 401 Water Quality Certificate each project needs under the Clean Water Act.

Legal experts today released a fact sheet outlining the case for state intervention. Picketers carried a blown up replica of a letter from New York State to prove the point. It shows the administration of Governor Andrew Cuomo in April denied a 401 water quality permit for a proposed 124-mile fracked-gas pipeline in New York.

“For many months, Governor McAuliffe has denied that he has authority to protect Virginians from the damages these pipelines would cause if built,” said David Sligh, Regulatory Systems Investigator with the Dominion Pipeline Monitoring Coalition. “The law clearly contradicts his assertions, a fact that may explain why the Governor’s office and top environmental officials refuse to respond to the detailed information we’ve sent them or answer the specific questions we’ve asked regarding this issue.”

“How many communities must be destroyed before Governor McAuliffe and our political leaders decide enough is enough?,” asked Pastor Paul Wilson, who ministers to the Union Hill and Union Grove Missionary Baptist Churches and will join the picket line on Wednesday. His churches are within a half-mile of Dominion’s proposed 53,000-horsepower compressor station for the Atlantic Coast Pipeline. “The 200 people I serve stand to lose their health, property values, and quality of life, while Dominion stands to profit. It’s not too late for Governor McAuliffe to get on the right side of history and to tell Dominion ‘no,’” added Wilson.

People are converging on Richmond this week from every region of the state—from southwest Virginia to Nelson County to Northern Virginia to Norfolk. Citizens will parade past the Governor’s mansion with signs like, “Yes, You Can, Protect Our Water” and chants like “Fracked-gas pipelines flood our coastlines,” before forming a picket line on the sidewalk in front of the Governor’s offices in the Patrick Henry Building.Tomorrow, Dan Marrow, a father from Dumfries, plans to bring a bottle of contaminated water from his family’s drinking well, and ask the Governor to sample it. The “Dominion Water” will list on the bottle the concentrations of toxins found in his family’s well, which is a short distance from a coal ash waste pond operated by Dominion Virginia Power.

An alarming new report shows that investments in new fossil fuels, including new fracking wells and pipelines, must stop now in order to avoid catastrophic climate impacts — like the permanent flooding of Virginia’s coastal communities and military bases.

Polling released in September indicates that Virginia voters largely back the demands of the picket. Seventy-one percent of those polled believe Governor McAuliffe should follow the approach of other southern states on coal ash disposal. Additionally, only 28% of Virginia voters said they support Governor McAuliffe’s efforts to build fracked-gas pipelines, with 55% opposed.

RESOURCES:
View the news release online at: http://chesapeakeclimate.org/press-releases/virginians-launch-three-day-picket-line-outside-of-gov-mcauliffes-richmond-offices
There's no paywall on Blue Virginia, and we definitely want to keep it that way! If you want to help support our work, you can donate here - thanks! Also, you can sign up for our weekly email list here.