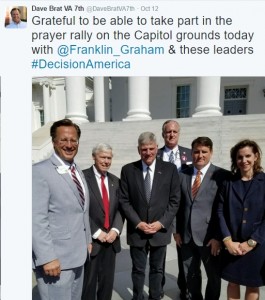 Yep, this guy (pictured at right and below), Franklin Graham (who was just in Richmond a few days ago), is who far-right-wing Rep. Dave Brat was just hanging out with, praying with, etc. Here’s a first-hand account from a recent Graham rally in Raleigh, NC.

I’m standing outside the state Capitol, attempting to ascertain what’s on the minds of Franklin Graham’s disciples as we approach Election Day, when an old man wearing a cowboy hat lets me know who’s in charge.

He calls me a “fucking sodomite” and tells me he hopes I “burn in the fires of hell.”

“Well, then, you’re a sodomite lover,” he snarls.

Let me point out that of all the horrid ways homosexuals are characterized in this country, the word “sodomite”—and the aggressive way it’s used—makes my blood boil. But I try to let it go. I’m here to do a job. It’s business, not personal.

Fast-forward a few minutes. It gets personal.

I’m talking to a sweet-looking little old lady who is attending the rally with her forty-six-year-old son. When he heard my line of questioning, he grabbed his mother by the arm.

“Look at his nose,” he says. “He’s a fucking Jew-boy. Don’t waste your time with him.” (Technically, my dad is Jewish, but my mom isn’t, so, according to Jewish law, I’m not actually a Jew.) But, I digress.

So those are some of Graham’s charming supporters. Also see here for more on Graham’s fascinating “thoughts” and comments over the years…

Yep, that’s who supposed “libertarian” Dave Brat hangs out with, praises, etc. On November 8, make sure you vote for Democrat Eileen Bedell instead. Thanks.