CORRECTION:  This article originally and incorrectly stated that the Southern Poverty Law Center was investigating Dave Brat for his white nationalist ties.  They have not opened an investigation on Dave Brat.  I had been told that material sent to them had been forwarded to their investigation desk and I misunderstood what that meant.  My apologies to the SPLC.

An article first published in Blue Virginia explores the ties Trump loyalist Dave Brat  (VA-7) may have to racist and anti-Semitic white nationalist organizations.  As outlined in the article, these ties are in some cases purely ideological, with Brat’s views in lockstep with those of the Imperial Wizard of the Virginia-based Rebel Brigade of the Knights of the Ku Klux Klan who, when asked whom he was supporting for president, said, “I think Donald Trump would be best for the job. The reason a lot of Klan members like Donald Trump is because a lot of what he believes we believe in.”

But the connections can be more tangible.  Brat, in his 2014 p 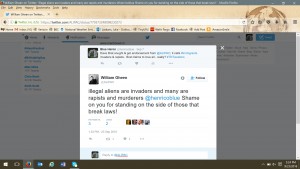 rimary run against Eric Cantor, accepted help (discussed below) from the Americans for Legal Immigration PAC (ALIPAC), despite its well-known ties to extremist groups.  In 2009, the Anti-Defamation League had shown that ALIPAC is promoted by neo-Nazi, white supremacist, and skinhead groups.  In 2013, ALIPAC’s leader William Gheen won the dubious distinction of being among the worst xenophobic leaders in the eyes of Right Wing Watch.

These facts did not give Dave Brat one moment’s pause.  On the contrary, he sought and received  ALIPAC’s endorsement early 2014.  Moreover, ALIPAC made GOTV robocalls for Brat in the crucial final days of the primary.  Months later, Gheen quoted Brat and bragged about ALIPAC’s part in Brat’s victory as part of a fundraising effort:

“Take a look at what the man we helped to defeat Eric Cantor last year has to say! He is saying what we have been saying for you through ALIPAC about this situation!

“’This [the immigration executive action] is about a Constitutional stand…if we don’t make a stand here, where will it end? And so the nature of our government is in question, and so that’s why we’re doing what we’re doing, and Boehner has said he’s going to fight it tooth and nail and so we’re going to hold him to that.’ — Representative Dave Brat (R-VA)
http://www.alipac.us/f12/bratexec-a…ion%92-317448/

“Don’t let America’s only Political Action Committee dedicated to electing people like Dave Brat and targeting people like amnesty supporter Eric Cantor for defeat over immigration issues falter in our mission! Do you remember how our unique robotic phone call contacted thousands of voters in Eric Cantor’s district to warn them of his support for Amnesty for illegals?….” (emphasis mine)

Dave Brat is not only ALIPAC’s guy – he gets around.  In 2014, Brat was endorsed by, and has since received thousands of dollars from, US Immigration Reform PAC (USIRPAC).  This extremist anti-immigration group is headed by Mary Lou Tanton, wife of John Tanton, former USIRPAC board member and founder of the Federation for American Immigration Reform (FAIR), deemed a hate group by the Southern Poverty Law Center, according to whom:

“Tanton has a lengthy record of friendly correspondence with Holocaust deniers, a former Klan lawyer and leading white nationalist thinkers, including Jared Taylor (who wrote in 2005, ‘When blacks are left entirely to their own devices, Western civilization — any kind of civilization — disappears’)….Tanton enthused over the work of John Trevor Sr. — a key architect of the bluntly racist Immigration Act of 1924 and a man who distributed pro-Nazi propaganda and warned shrilly of ‘diabolical Jewish control’ of America….Tanton has also made several racist comments, telling a reporter in 1997 that unless U.S. borders are sealed, America will be overrun by people ‘defecating and creating garbage and looking for jobs.'”

It sure seems to this writer that Dave Brat has been consorting with despicable, extremist, and dangerous actors.

Fortunately, voters in VA-7 have a wonderful and SANE alternative in Democrat Eileen Bedell.  To learn more about Eileen and to help her rid Con 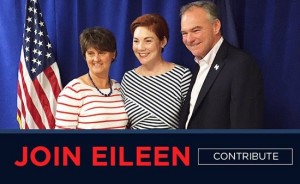