Dave Brat loves all people – not!

I once overheard Dave Brat say sarcastically: “I ran on ‘I love all people,’ right?”.  I was at an event of his during his 2014 campaign for the VA-7 seat.  He was in a conversation with his staff and was rejecting out of hand the idea that his immigration stance could lead to an accusation of bigotry.

But already then, and increasingly ever since, Brat has been aligned with the Ku Klux Klan and other white nationalist and supremacist hate groups.  Brat’s unexpected primary victory over Eric Cantor, the first Jewish House Majority leader, was joyfully trumpeted throughout such deeply anti-Semitic and racist social media networks as Stormfront.

Warning: these examples from Stormfront are highly offensive. 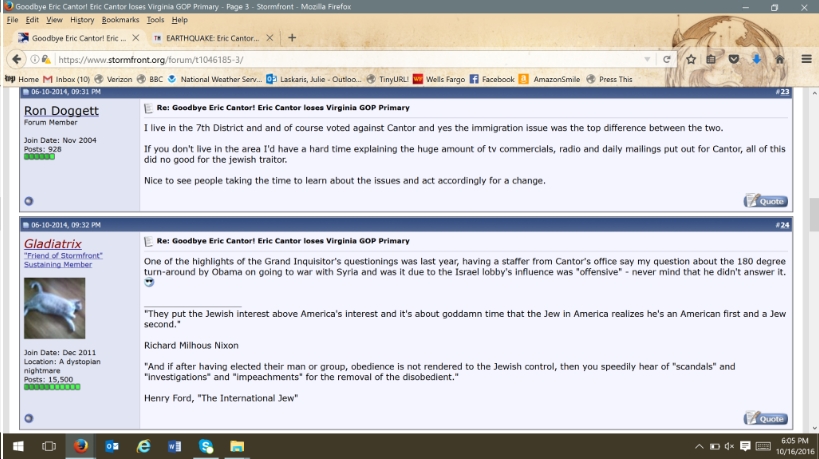 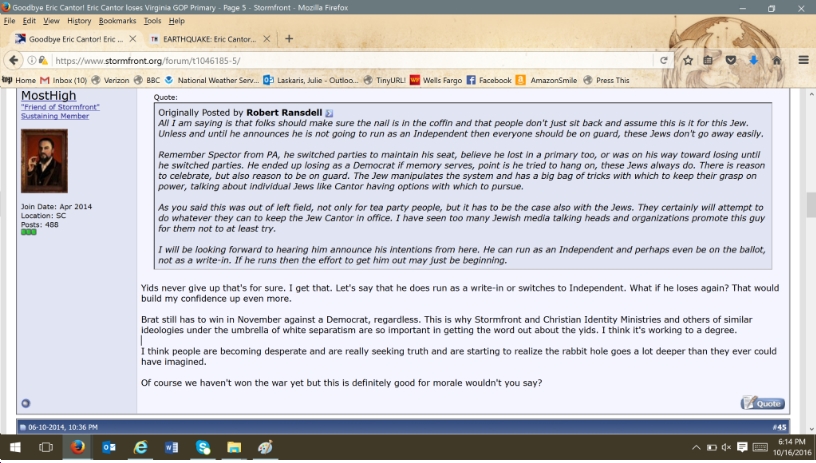 In a shout-out to such sentiments, Brat himself said of his victory: “It was basically a miracle, you know, from God straight through the people who worked so hard for me.”  Subtext:  God was working towards having a Christian in office; after all, how could he work through a Jew?  You can’t expect them to be anything other than “crony capitalists” who want cheap labor.

Just in case this seems uncharitable, let’s see who was working so hard for Brat.

Well, there was ALIPAC, promoted by neo-Nazi, white supremacist, and skinhead groups, according to the Anti-Defamation League.  In 2013, ALIPAC won the dubious distinction of being among the worst xenophobic leaders in the eyes of Right Wing Watch.  Brat had sought and received ALIPAC’s endorsement early in his run against Cantor; recognizing a kindred spirit, ALIPAC made robocalls for Brat in the last days of the primary, and months later were still crowing about their part in the victory (emphasis mine):  “First, we fight the good fight regardless of our chances of victory. When we fought Eric Cantor last year a lot of people thought we had no chance. Cantor outspent our guy Dave Brat by more than 40 to 1 and had the entire backing of the GOP national leadership but we beat him by a landslide!”

Brat and the hate-mongering Alt-Right media

And then there were the hate-mongering figures of the Alt-Right media and their allies, who gave Brat hours of air time at the national level and appeared at his fundraisers.  These included: Ann Coulter (also on Right Wing Watch’s Worst Xenophobes List), virulent anti-immigrationist Laura Ingraham, Dave Bossie (then President of Citizens United), and Steve Bannon (Breitbart); the latter two are now in the top echelons of the Trump campaign.  I go into the details of these connections here.

But there’s more!  Brat was an early supporter of Trump’s, not formally endorsing him until after the primaries, but issuing numerous statements beginning in April 2015 (coincidentally, shortly after Trump donated to his campaign).  You can read more about this here with a link to an amusing radio interview.

Trump and KKK support in Virginia

As readers of this blog are no doubt well aware, Trump receives wide and enthusiastic support from white nationalist, white supremacist, and neo-Nazi individuals and groups.  Perhaps less well-known is that some are from Central Virginia.  As the Imperial Wizard of the Rebel Brigade of the Knights of the Ku Klux Klan said, “I think Donald Trump would be best for the job. The reason a lot of Klan members like Donald Trump is because a lot of what he believes we believe in.”

The same is true of Dave Brat, particularly on immigration, an issue of core concern to people who believe that this country is meant for whites only.  Here is one more posting from Stormfront (the last, I promise) showing Brat as crucial to that cause: 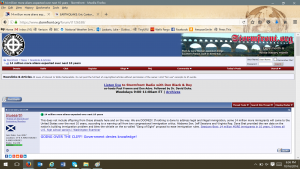 Brat himself is usually too cautious to say anything overtly racist, though at minute 9:00 of this video, interviewer Alan Colmes presses him on the fact that Trump’s support is coming mainly from white supremacists and the white pride movement.  Brat’s rather rambling reply includes his saying that he loves it when reporters writing about Brexit refer to “old white Englishmen;” those, says Brat, “are Englishmen.”  Sorry naturalized citizens and descendants – you ain’t the real deal.  England is a white country.  A little farther

on Brat states of Americans that “we want our country back,” and then compares influxes of illegal immigrants to invaders.  The notion of a naturally white country, of losing the country to immigrants, and of immigrants as invaders is precisely the language of the white supremacist and white nationalist groups.

Brat given leadership role by Trump

Trump’s Virginia campaign recently underwent some turmoil caused by fractiousness within the party ranks.   According to Graham Moomaw of the Richmond Times-Dispatch, Brat has been appointed to a leadership committee to oversee Trump’s campaign operations here.  At a time when many religious leaders are condemning Trump (such as the more than 700 female Christian leaders who signed this letter lashing out at his misogyny), and decent Republicans are disavowing him, Brat is doubling down.  So, Mr. Brat, to answer your cynical and rhetorical question of two years back:  no, you do not love all people.  In attaching yourself to Trump, you have allied yourself with this bloody time in our history.

Fortunately, voters in the VA-7 have a strong progressive sane candidate in Eileen Bedell. A recent poll – taken before the Trump Trainwreck – shows Eileen closing in on Brat.  Eileen needs your help – money, volunteer time, and VOTE – to flip this seat.  To learn more about Eileen, click HERE.  To donate to her campaign click HERE.  And to pitch in personally to help get her across the finish line, click HERE.