FYI, right-wing radio host John Fredericks (see tweet below predicting that Republican Barbara Comstock will lose her election to Democrat LuAnn Bennett in VA-10) ran to be a Donald Trump delegate to the Republican National Convention, served for months as vice-chair of Trump’s campaign in Virginia (when Corey Stewart was still chair), and is on the new “leadership team” for Virginia. In addition, Fredericks “has interviewed Trump on his program numerous times and hosted a steady stream of on-air surrogates since first predicting Trump would win the Republican nomination in May 2015…[incluiding] Corey Lewandowski, Eric Trump, Newt Gingrich, and Ivanka Trump.” The point is, Fredericks about as tight with the Trump campaign as you can get, so this “Upset Special Prediction” definitely appears to be the Trump camp sending Barbara Comstock – who only ditched Trump after the Access Hollywood tape came out, but before that didn’t seem to have a problem with Trump’s many racist, xenophobic, misogynistic, violent, anti-democratic, ignorant, idiotic, etc. remarks – a message that they are NOT pleased with her.  In sum, Comstock’s cowardly waffling has now managed to piss off core Trump supporters, while hopefully not fooling any non-Trump supporters into voting for her. We’ll see on November 8, but for now, I’m really really enjoying this – more popcorn and hot butter, please!  🙂 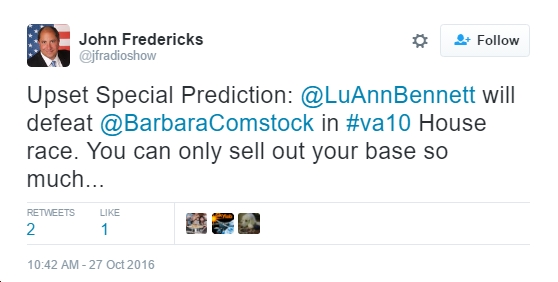