In 2016, as is usually the case, most Virginia congressional districts were safely “gerrymandered for incumbent protection,” so they weren’t particularly competitive. For instance, the strongly “blue” 11th CD didn’t even see a Republican challenger to Rep. Gerry Connolly. And although the 3rd and 8th CDs had Republican challengers to Reps. Bobby Scott and Don Beyer, respectively, they of course had no chance and got wiped out at the polls.

In several deep-red districts, like the 6th, 7th and 9th CDs, Democrats did run candidates, but unfortunately all of them lost badly. In the 2nd CD, which is borderline competitive, Democrats were not able to recruit a top-tier candidate and, predictably, got annihilated. In the newly-drawn 4th CD (following the racial “unpacking” of the neighboring 3rd CD), Donald McEachin (R) won easily, as expected, against Sheriff Mike Wade (R). And in the 5th CD, which was borderline “purple,” Democrat Jane Dittmar lost badly to Republican Tom Garrett.

How did these results compare to 2012?  See the chart below, although as you look at it, keep in mind that most of the districts changed a bit after the 3rd CD’s court-ordered “unpacking.” Still, a few things jump out at me here. 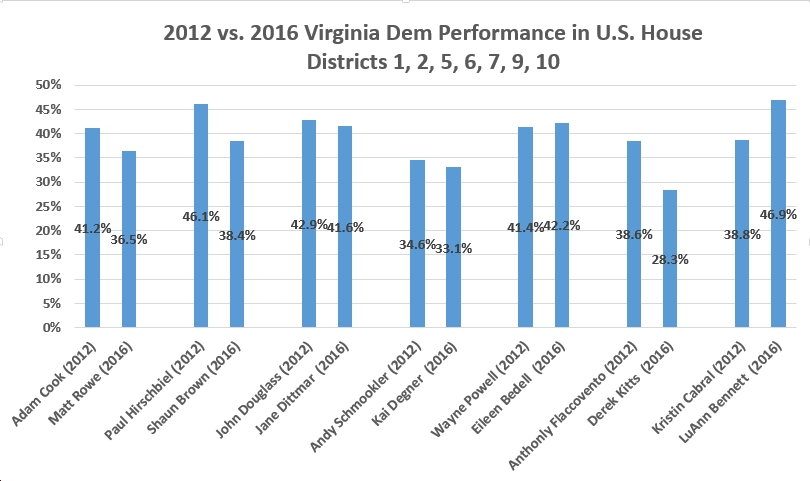 Enough statistical wonkiness for one day? Hope you enjoyed it as much as I did! LOL