Amid the swirling accusations and counter-accusations across America in the waning days of Election 2016, here are a series of questions to ask about the campaign in Virginia’s 10th Congressional district:

To provide a brief summary, Members of Congress have a ‘franking’ privilege — the ability to send mailings out ‘postage paid’ by the taxpayer when it is in furtherance of their official duties. Due to the reality that these are politicians, whose lives are both official duties as paid public servants and politicians looking for political advantage, there are serious rules as to how Senators and Representatives can — and cannot — legally use the franking privilege.

The Franking rules are well established, have been around quite a long time, and are well known by anyone who has spent (like Barbara Comstock) serious time on Capitol Hill (or, well, simply Washington-area natives who read the newspaper).

Now to the particulars, see this from last week:

It should be illegal to send self-promotional material paid with gov’t funds 2 weeks B4 #Election2016#VA10pic.twitter.com/VxELrFApTe 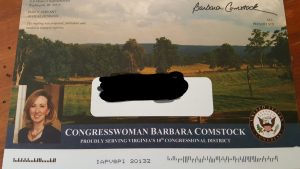 Here is an unsolicited mail item from Barbara Comstock’s office that used the Franking privilege well within the blackout period.

On the face of it, it appears likely that Barbara Comstock violated the House franking privilege, illegally using taxpayer resources to help her amid a (surprisingly to her) tough reelection campaign.

Unless or until Barbara Comstock and her office provide full information about this mailing — how many were sent and on what date — it seems fair to operate under the assumption that Barbara and her staff violated the law.

Regretfully, a GOP-dominated House will not investigate something like this seriously and certainly not in a timely manner within less than a week of the election date.

Perhaps someone in the media (hint, journalists …) will look into this and ask the questions worth asking.